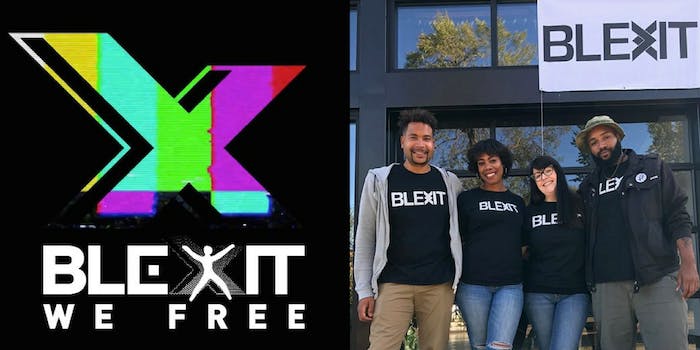 The nonprofit founder has found herself in the middle of a massive far-right nightmare.

A Minnesota-based nonprofit called Blexit, created for the organizing of Black economic power, has sent a cease-and-desist letter to far-right firebrand Candace Owens for using the same name for her very different movement to get Black people to leave the Democratic Party.

The letter, sent to Owens on Thursday morning, comes days after Kanye West distanced himself from Owens, and politics altogether, following the claim she made Saturday that West designed the logo for her anti-Democrat “Blexit” movement. (The logo was actually made by an artist who didn’t want to be named, Owens later said.) However, the association with West led to many claiming that Blexit was his movement, and to Owens clarifying that the movement was hers.

West’s cryptic departure as a Trump supporter was a major blow for Turning Point USA, a conservative nonprofit for which Owens is the communications director, and for conservatives in general who were depending upon the hip-hop mogul to drum up greater political support for the right.

However, no organization has had to deal with the fallout of Owens’ movement as much as the real nonprofit Blexit has.

The Blexit nonprofit, founded in 2016 by Me’Lea Connelly, is an organization based upon the nationwide movement for Black people to stop supporting financial institutions and companies that cause Black people pain. These institutions include banks that give subprime mortgages, payday lending companies that exploit Black workers, and public schools that fail the needs of Black students. Connelly told the Daily Dot that she was flying back from studying a cooperative community in Italy when she was alerted about Owens’ usage of “Blexit,” and the vitriol that ensued as a result of Kanye’s public exit from politics.

“People who support our work reached out, really concerned and confused, and that’s when we kind of realized this was really blowing up online and that it was going to be a major issue for us,” Connelly said.

“Blexit is all about finding the economic root of oppressive systems and finding ways to exit them by creating replacement systems that actually work for us,” Connelly said. “I think that the concept of it being around leaving a political party is shallow, it’s misguided, and it misses the mark of what the Black community truly needs.”

Connelly said that the nonprofit, while launched in Minnesota in 2016, is rooted in a nationwide online movement that began in 2015, and also promotes economic freedom from anti-Black institutions. Over time, individual social media accounts began using Blexit as a hashtag to spread the message, with celebrities such as Killer Mike encouraging other Black people to take their money to institutions that will support them.

“We don’t have to burn our city down. But what we can do is go to your banks tomorrow. You can go to your bank tomorrow. And you can say, ‘Until you as a corporation start to speak on our behalf, I want all my money. And I’m taking all my money to [Atlanta’s Black-owned credit union] Citizens Trust,'” Killer Mike said in 2016, during an interview addressing the fatal police shooting deaths of Alton Sterling and Philando Castile.

Connelly said that after the fatal shooting of Castile, a school cafeteria supervisor in St. Paul, Minnesota, the people behind the Blexit nonprofit began meeting amid turmoil and mourning to create a plan toward this economic freedom and prosperity. Two years into their mission, the nonprofit has already created an annual shopping festival for Black-owned businesses that brings in $50,000 each year, an alternative plan for payday loans, and are working toward opening the state’s only Black-led credit union, among other projects.

When she landed back in Minnesota this week, Connelly and others had to face the groundswell of negative comments online, the confusion from their thousands of members nationwide, and the support of conservatives. Several, many of them white, had joined as members and donated to the nonprofit, thinking this was Owens’ anti-Democratic Party movement.

But in the days since Owens first opened this can of worms, the older Blexit has organized and responded accordingly, tweeting out clarifications, purging 1,000 new likes from the nonprofit’s Facebook page (where many were spouting off MAGA-related comments), and emailing new and current members to clarify that, no, they are not advocating for the departure of Black people from the Democratic Party, nor are affiliated with any political organizations intending to “sway Black voters to right-wing ideology,” MAGA or otherwise. This email told donors and members how to rescind their donations within 30 days, given the mixup between the two same-named organizations.

On Thursday morning, the nonprofit sent Owens the cease-and-desist letter, expressing an intention to pursue legal action should she not respond by Nov. 7. And while Blexit was never about co-opting or owning a national movement, Connelly and others behind the nonprofit are in the process of trademarking its two-year-old name and logo.

Amid the concern, Connelly said, both supporters of the nonprofit and of Owen’s movement have responded to Blexit’s clarification with support. Those who are genuinely backers of the Blexit nonprofit have reached out and shared positive news about the organization, while even white conservatives couldn’t argue with the promotion of financial freedom for Black people. Conservatives overall thanked Blexit for “being honest” and giving them an opportunity for a refund.

So far, they’ve received fewer requests for refunds than donations over the past few days (though Connelly isn’t sure of exact numbers). Connelly chalks the lack of refund requests to the confusing situation that Owens has led her followers into. One woman who donated initially accused the nonprofit of creating their organization to “steal money” from West and demanded a refund, then responded again 10 minutes to apologize for her accusations after having done some research. She ended up donating $2,500 to the nonprofit.

And somehow, Connelly’s work is still not done. On Wednesday, she woke up to tweets from a famous rapper, who she did not name, writing that if someone is wearing a Blexit shirt, they’re an enemy of the Black community. Moments after, Connelly watched her son Josiah leave his room, dressed for school in a shirt displaying the nonprofit’s Blexit logo. She said it was an extremely hard moment for her, not knowing whether to tell him to take off the shirt, which he wears with pride for his mother’s work, or run the risk of having him targeted and bullied by peers.

She tweeted a thread addressing her concern, urging others to know that the Blexit nonprofit is not what many have come to have learned online.

“It was a difficult moment for me, and at the very least it made me want even more to fight and make sure that people at least knew the truth,” Connelly said. “I just want my son to be able to wear that shirt and be proud.”

Owens did not respond to the Daily Dot’s request for comment.