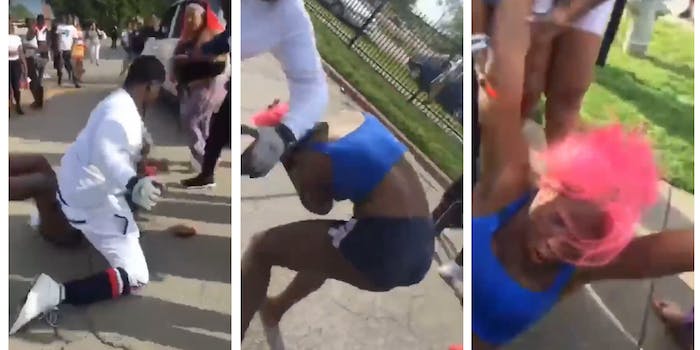 Police are investigating it as a hate crime.

A video surfaced over the weekend showing at least two people brutally beating a Black transgender woman. Dallas Police are reportedly investigating it has a hate crime.

The video opens to show a sunny-day undisclosed gathering in the streets; people are talking into the camera and, though inaudible, appear to be in high spirits. A few minutes in, the camera pans over to screaming and crying. A transgender woman, since identified as Muhlaysia Booker, is seen on the ground while a man in a white t-shirt kicks her.

When contacted on Monday, the man who took video, under the name Taj Mahal, declined to comment to the Daily Dot. Booker did not immediately respond to the Daily Dot’s request for comment.

According to the Dallas Police Department, Booker was assaulted after a minor traffic incident, which led to a verbal altercation. At least one other person joined the man, kicking Booker as she screams, “Stop! Stop!” and tries to shield herself with her hands.

At one point, after Booker manages to get up and try to escape, the man follows her and continues to punch her. While many in the crowd try to stop the assaulters, others are heard cheering them on.

According to local news, Booker’s family says she had several fractures on her face and a broken wrist. She was reportedly taken to the hospital following the incident and was home by Sunday.

On Sunday evening, Dallas Police arrested 29-year-old Edward Thomas in connection with the crime. Dallas Mayor Mike Rawlings released a statement on Saturday, condemning the attack: “Those who did this do not represent how Dallasites feel about our thriving LGBTQ community. We will not stand for this kind of behavior.”

Late on Saturday night in a Facebook status, Booker thanked her supporters for their love. “THANK YOU SO MUCH ITS A BLESSING BEING LUCKY ENOUGH TO WITNESS THE LOVE AND RESPECT IM GETTING,” she wrote.

Violence against the transgender community continues at alarming rates, with transgender people of color and transgender women more vulnerable to attacks, especially in the South, according to the National Center for Transgender Equality. For two years in a row, transgender killings have reached record highs, and that doesn’t even include the high likelihood of underreporting.

A march has been organized in Booker’s name by non-profit Next Generation Action Network for Tuesday.