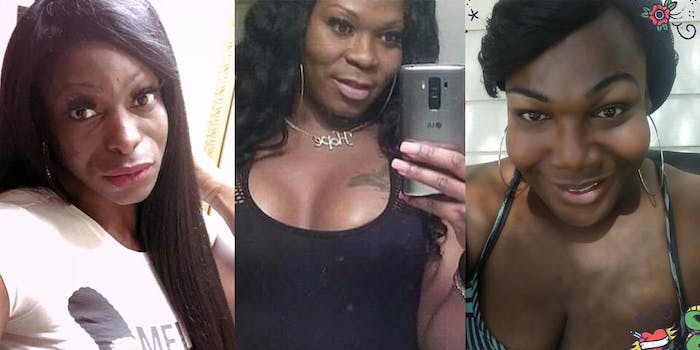 Local activists say the sheriff's office is unsupportive of the trans community.

Over the course of 2018, three Black trans women have been fatally shot in Jacksonville, Florida, and the trans community is afraid the murders are related.

The Root reports that the first victim, Celine Walker, 36, was shot and killed in a hotel room on Feb. 4. The second victim, Antash’a English, 38, was found on June 1 between two houses after being shot in the abdomen and passed away in the hospital. The latest victim, Cathalina Christina James, was only 24 years old and was found dead on Sunday in a hotel room only 10 miles from the original murder scene.

The Jacksonville Sheriff’s Office is investigating these three murders as separate cases. However, activists worry that they may be ignoring a possible serial killer, perhaps in part due to an unsupportive relationship with the trans community. For some, it recalls the situation of the Toronto’s Gay Village serial killer, who has so far been charged with the murders of eight people, and who the police vehemently denied the possibility of.

Paige Mahogany, the head of the Jacksonville Transgender Awareness Project, spoke to NBC News about the relationship between the Jacksonville transgender community, and their police force, saying, “When the sheriffs come out, the sheriffs make the girls feel like suspects, not victims. A lot of these girls are being beaten up, they’re being robbed, they’re being assaulted, but they’re not reaching out to the police department.”

The relationship has also been strained by the sheriff’s oOffice’s refusal to correctly gender the victims. Gina Duncan of Equality Florida made a statement on the Jacksonville Sheriff’s Office misgendering the victims, saying, “By misgendering these transgender women, the JSO disrespects their memory and impedes their own investigations.” She went on to explain the potential damage they are doing to their own investigation, saying, “These are out, trans women and that is how they are known in the community. All across the nation, law enforcement agencies have adopted protocols for responding to anti-transgender violence. They recognize that respecting the community builds trust and creates a willingness to share information that may catch a killer.”