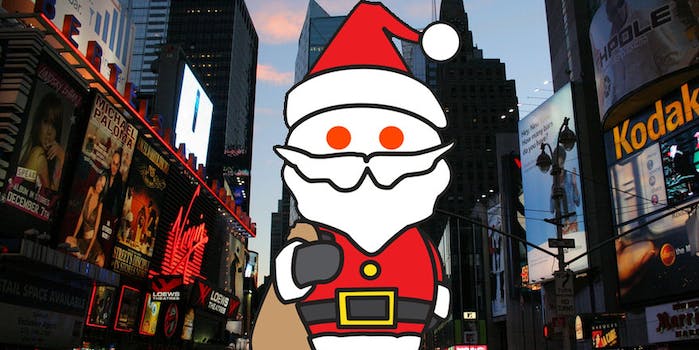 Do your Black Friday shopping from home, thanks to Reddit

The livestreaming "Redditgifts Shopping Network" is an online alternative to the crowds and early morning hours that are native to the biggest shopping day of the year.

Redditgifts is the gift the keeps on giving.

Since launching in 2009 and being officially acquired in 2011, Redditgifts has proven to be one of Reddit‘s major successes. It set a Guinness World Record for the most participants in a Secret Santa program in 2011 and shattered its own record the following year. In 2012, the site created the Redditgifts Marketplace, where participants and vendors alike could buy and exchange gifts with almost no hassle.

This year, the ambitious program is tackling a new monster: Black Friday.

For 12 straight hours on Nov. 29, the Redditgifts Marketplace will livestream the “Redditgifts Shopping Network,” an online alternative to the crowds and early morning hours that are native to the biggest shopping day of the year. In addition to offering deals, the RGSN will provide redditors with a variety of Black Friday–themed programming, broadcast from New York City.

“It will be a combination of everything that is great about Reddit,” Redditgifts marketing manager Kaela Gardner told the Daily Dot. “We’re going to have a lot of celebrities and other notable persons stopping by to sing, do product demos, have live AMA sessions, and generally goof off. We’ll also feature some of our favorite subreddits and have some audience interactions.”

Details of the event, such as which celebrities are on board or even its actual start time, are being kept secret; they will be released to those who sign up for updates as the date draws near. Obviously, the fanfare going into the first-time affair is designed to increase the visibility of the Redditgifts Marketplace—and turn a profit.

“There are a lot people who don’t even know Reddit has a marketplace, and this will help raise awareness for that,” Gardner said. “As has been noted in the news recently, Reddit isn’t profitable yet, and we believe the marketplace will be key in getting us there in the future.”

Redditgifts has broken records on the site itself, and the geeky, interesting gifts in the marketplace certainly attract online shoppers. But is a live-action version of Reddit going to resonate with the same audience? Gardner admits that no one is positive how exactly things will turn out with the RGSN, but she is hopeful.

“This is definitely new and unknown territory for us,” she said. “We’d love to see RGSN turn into a tradition, with each year getting bigger and better in terms of the sales, the celebrities, and the quality of the content. But a lot of that will depend on how things go this year. Hopefully this is the beginning of something fantabulous.”

Redditgifts plans to follow up the event with another round of sales on Cyber Monday—minus the celebrities and livestreaming.

“We’ll be putting together some great product collections, and each hour starting at 10AM EST we’ll release one of them, and all those products will be on sale for just that one hour,” Gardner revealed. “There will be six rounds of sales over six hours, and there are going to be some pretty good deals to be had.”

Whether the Redditgifts Shopping Network succeeds or flops, the annual Secret Santa program is poised for another stellar showing. Gardner believes the exchange’s annually increasing number of participants—it climbed from 4,000 people in 2009 to its record-breaking 40,000 in 2012—will translate to its “biggest year yet.”

And when asked if another Guinness World Record was possible, she replied “Absolutely.”

Signups for the annual exchange begin on Nov. 4.