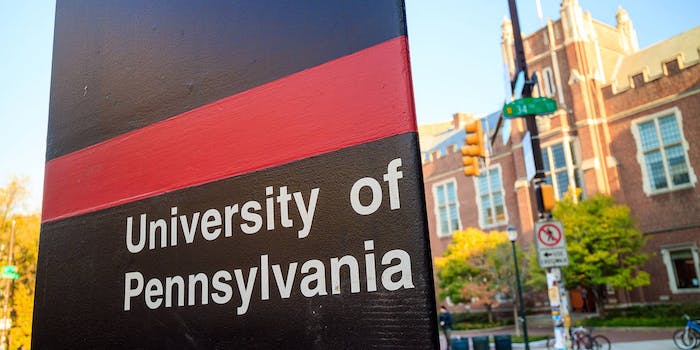 Students were added to a racist GroupMe account that called for their lynching.

Black freshman students at the University of Pennsylvania were reportedly added to a racist GroupMe account where a call to lynching was made.

According to images shared on social media by students at Penn, group chats were named “Mud men” and “Trump is love.”

Penn staff released a statement on Twitter: “The university is taking every step possible to address both the source of the racist material and the impact is has had on Black students on campus.”

A statement from Penn on the current events on campus. pic.twitter.com/CALK7OERup

The Daily Dot spoke to a student added to the group chat once news of this group had already spread. He is not African American, but had access to the group.

According to Penn first year student Ghali Benlafkih, pictures of African Americans being lynched were sent and the word “nigger” kept being used throughout the conversations.

“We are sad that racism against people of color is still very much present and we are angry that our friends and classmates at Penn have to endure such uncalled [for] hatred,” Benlafkih said.

It is unknown how many students were added to this group chat, though its negative affects go far beyond the confines of GroupMe. A Penn student shared his thoughts on Facebook and the post has gone viral since. 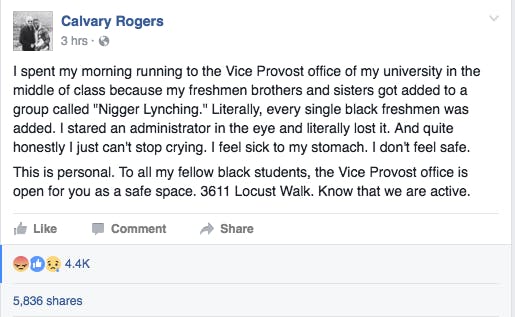 On Friday afternoon students gathered to protest against the messages outside of the campus library.

Help is reportedly being offered by the Vice Provost for University Life, whose office has been designated a safe space for students to speak out about the racist cyberbullying.

Update 8:15am CT, Nov. 12: According to Fox 29 in Philadelphia, a University of Oklahoma student has been suspended.