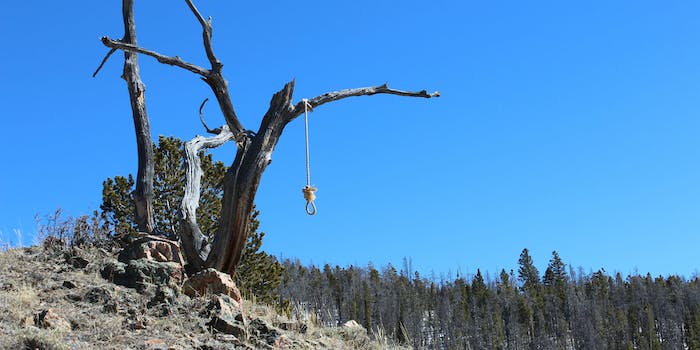 The young boy was allegedly targeted by the teens for some time.

An 8-year-old boy from Claremont, New Hampshire, was allegedly lynched after being harassed by a group of teenagers for his skin color.

On Aug. 28, the biracial boy was playing with a group of teenagers when the teens reportedly began calling the boy racist slurs. They threw sticks and rocks at his legs, until the teens found a rope and chose to hang the victim on a tree, according to the boy’s family. After swinging three times on the tree, the young boy was allegedly able to remove the rope from his neck and escape. Gashes were left on his neck, and he was later airlifted to Dartmouth-Hitchcock Medical Center to be treated for the cuts. No internal injuries resulted from the alleged lynching.

The boy’s grandmother, Lorrie Slattery, claims the teenagers previously targeted the child with racial slurs and believes the lynching was racially motivated. The Claremont police are currently investigating the incident, but Slattery fears the police will refuse to press charges because the teenagers told law enforcement that the incident was an accident.

“If it was an accident, that boy or anybody there wouldn’t have left him,” Slattery told the Valley News. “I believe it was intentional.”

While the boy is recovering, Slattery remains afraid for his mental health, as he refuses to discuss the lynching or share his feeling. The victim’s mother, Cassandra Merlin, turned to Facebook, condemning the boy’s alleged attackers and posting photos of her child’s gashes.

“I don’t care if this was a so called accident or not,” Merlin said in a Facebook post obtained by the Root. “My son almost died because of some little shit teenage kids.”