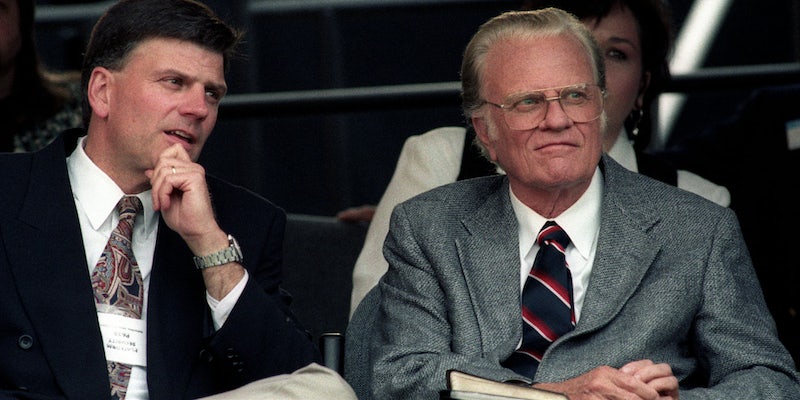 He was America's pastor, in the best and worst ways possible.

American minister Billy Graham, 99, died today in Montreat, North Carolina. Throughout his life, Graham had been a controversial figure, yet he gained an enormous following among American Christians, with his preaching essentially giving birth to the modern evangelical movement.

Graham, who preached to at least 215 million people in his lifetime according to NBC, used everything from radio to television to the internet to preach a broad, colloquial Christian message without a denomination in mind. He served as both a minister for U.S. presidents and even became a close friend and ally for Martin Luther King, Jr.

Graham has since received glowing praise from Vice President Mike Pence and other Republican politicians, who see his ministry as a cornerstone of American life.

Billy Graham's ministry for the gospel of Jesus Christ and his matchless voice changed the lives of millions. We mourn his passing but I know with absolute certainty that today he heard those words, "well done good and faithful servant." Thank you Billy Graham. God bless you(2/2)

"My home is in heaven, I'm just traveling through." #BillyGraham … Praying for the Graham family and thanking God for the gospel shared through him during his journey in this world. He will be missed.

Sad to hear about the passing of Billy Graham. But what a legacy he has left on this earth.

I know when he saw Jesus' face, he was welcomed with the words "Well done my good and faithful servant, well done."

Even President Donald Trump joined in on commemorating Graham’s life, calling him “a very special man.”

The GREAT Billy Graham is dead. There was nobody like him! He will be missed by Christians and all religions. A very special man.

But the reality is much more complicated, and Graham was notorious for his questionable opinions. During the Nixon administration, he reiterated an anti-Semitic conspiracy theory that claimed Jewish-Americans had a “stranglehold” on the media that “has got to be broken,” according to leaks from the Nixon tapes. In more recent years, he had condemned gay marriage, and his website even targeted transgender people.

So while many Republicans continue to treat Graham as “America’s pastor,” others are urging others to acknowledge the scope of Graham’s deeply troubling and bigoted opinions that have since given birth to things like conversion therapy.

Is it too soon too talk about Billy Graham's homophobia?

About the monster of a racist, sexist son he raised?

About the Graham family's role in breaking up countless relationships between queer kids & their Christian parents?

It sure isn't, praise Jesus.

Billy Graham bailed MLK out and urged President Eisenhower to intervene for the Little Rock Nine but he was an anti-semitic and homophobic piece of trash.

Obsequious and fawning revisionist history pouring forth about Billy Graham, a man who was on the wrong side of history in so many ways. From anti-semitism to homophobia, his passing will not wipe the hate he helped foment that damaged so many lives. RIP @CNN @MSNBC @FoxNews

Maybe that means Graham really was “America’s pastor,” after all.