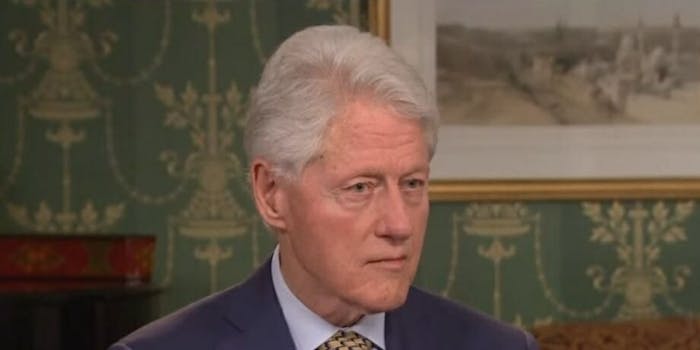 He's not sure about Franken's accuser.

Former President Bill Clinton, who has been deemed too toxic for Democrats in the mid-term elections, had a difficult time answering Monica Lewinsky questions during an interview this week, leading many to wonder why the president hasn’t had his own #MeToo self-examination.

Citing a letter from the 36 women Franken worked with on Saturday Night Live who showed their support of Franken and said they had “sincere appreciation that he treated each of us with the utmost respect and regard,” Clinton said he wasn’t sure about one of Franken’s accusers.

In an interview with PBS, via Mediaite, Clinton was asked by Judy Woodruff about relating his relationship with Monica Lewinsky to Franken.

Responded Clinton: “In general, I think that’s a good thing. We should have higher standards … I think that—I’ll be honest—the Franken case, for me, was a difficult case, a hard case. There may be things I don’t know. But maybe I’m just an old-fashioned person, but it seemed to me that there were [36] women on Saturday Night Live that put out a statement for him, and that the first and most fantastic story was called, I believe, into question.

“Too late to wade into it now. I mean, I think it’s a grievous thing to take away from the people a decision they have made, especially when there is an election coming up again. But it’s done now. And I think that all of us should just be focusing on how to do better and how to go forward.”

Former Los Angeles news anchor Leeann Tweeden was the first to accuse Franken of sexual misconduct, saying he forcibly kissed her and groped her without her consent. Later, Tweeden was questioned because she had appeared on Sean Hannity’s Fox News show previous to revealing the Franken news.

Here’s the full video of the Clinton interview. The Franken question is asked at about the 5:20 mark.