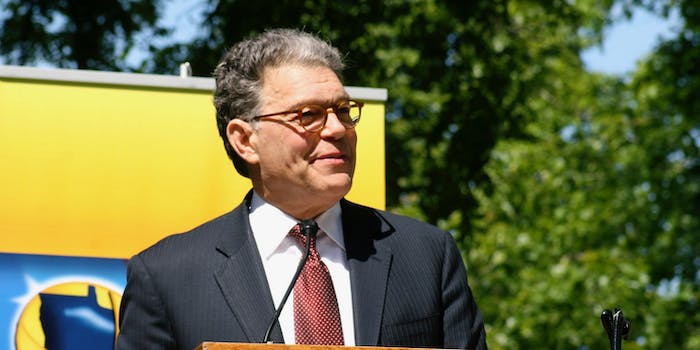 They said Franked was nothing but respectful to them. Others see this logic as flawed.

Thirty-six women who have worked on Saturday Night Live have released a letter showing their support for Sen. Al Franken (D-Minn.) after journalist Leeann Tweeden accused the senator of sexual misconduct.

Franken, who was one of the original writers on SNL and worked for the show from 1975-1980 and 1985-1995 before becoming a senator, faced immediate criticism and condemnation over the allegations from politicians, comedians and SNL itself. He apologized to Tweeden and is now the subject of an ethics investigation.

In their letter of support, the former and current SNL staffers—which include original cast members Jane Curtin and Laraine Newman along with several writers, producers, coordinators, and assistants—condemned Franken’s actions but wanted to speak for his character. None of them, the women wrote, have experienced any harassment from Franken during the time that they worked with him.

A full list of the women who signed the letter can be found at the Star Tribune.

We feel compelled to stand up for Al Franken, whom we all had the pleasure of working with over the years on Saturday Night Live (SNL).

What Al did was stupid and foolish, and we think it was appropriate for him to apologize to Ms Tweeden, and to the public. In our experience, we know Al as a devoted and dedicated family man, a wonderful comedic performer, and an honorable public servant. That is why we are moved to quickly and directly affirm that after years of working with him, we would like to acknowledge that not one of us ever experienced any inappropriate behavior; and mention our sincere appreciation that he treated each of us with the utmost respect and regard.

We send our support and gratitude to Al and his family this Thanksgiving and holiday season.

The letter does not address the allegations from Lindsay Menz, who says that Franken groped her as they took a photo together at the Minnesota State Fair in 2010 when Franken was a senator.

Also, an initial framing of the letter did not mention that the majority of the signers were former SNL cast and crew, which led some to believe that the letter was supported by current cast members. Only two of the women who signed, show photographer Mary Ellen Matthews and script coordinator Claire Shirey, currently work on SNL.

The backlash against the letter was immediate, with many pointing out that while men like Franken might treat some women with respect, that doesn’t mean it’s the case with every woman. Also, being a “family man, a wonderful comedic performer, and an honorable public servant” doesn’t excuse or make void being the kind of man who gropes women and touches them without consent.

Just because he didn’t harass *you* doesn’t mean he’s a “good guy”.

How is it difficult for grown adults to understand that someone who is nice to you is still capable of harassing or abusing others pic.twitter.com/lg6oR36C6e

This weekend, Lena Dunham came under fire for her similar support of Girls writer Murray Miller, who had been accused of sexually assaulting actress Aurora Perrineau. Critics find these types of “testimonies” by people who were not there during the alleged attack a distraction from holding men accountable for their actions.