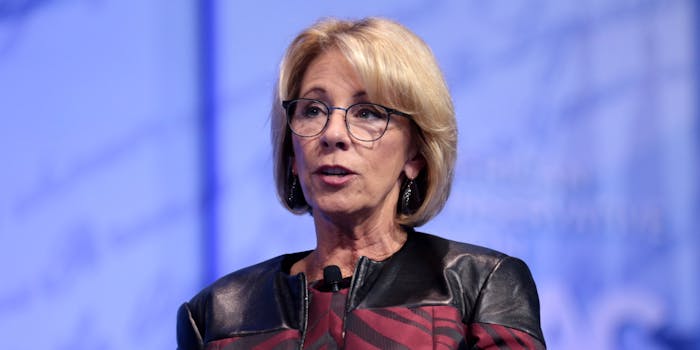 The teachers enter their 6th day of protests.

While touring a Dallas middle school last Thursday, Betsy DeVos weighed in on the teachers’ strike in Oklahoma, saying those protesting should keep “adult disagreements” out of schools, according to the Dallas Morning News.

“I think about the kids,” DeVos said. “I think we need to stay focused on what’s right for kids. And I hope that adults would keep adult disagreements and disputes in a separate place, and serve the students that are there to be served.”

The teachers’ strike in Oklahoma has reached its sixth day, with teachers convening at the state capitol’s steps last week to demand more money for schools, according to the Washington Post. The protests began over teacher pay—teacher salaries in the state haven’t been raised since 2008—but now the teachers are calling state legislators to invest in the children of Oklahoma, whom they believe don’t have the appropriate resources to learn.

The strikes in Oklahoma were inspired by a successful teacher walkout in West Virginia, where teachers pressured the state into giving them a 5 percent raise after shutting down schools for nine days. Additionally, Kentucky teachers briefly shut down some school districts to protest pension reforms last week, and teachers in Arizona have threatened to walk out unless the state restores recently cut funding.

DeVos’ comments don’t come as a surprise, as she’s been critical of teacher walkouts in the past. In February, she criticized the protests in West Virginia for allowing kids to “suffer for adult squabbles.”

It¹s now day 4 of #WVTeacherStrike. Whether you believe good teachers deserve better pay – I do – and/or states should be fiscally responsible – I do – we should all agree kids should not suffer for adult squabbles

But kids are directly harmed when they are barred from going to school to learn. So I hope both sides in WV come to the table to negotiate a swift resolution and get students back in their schools

Although Oklahoma lawmakers passed a tax bill to increase school funding and give raises that would average about $6,000, many teachers continue to strike until the state passes additional measures—including a bill ending the state’s capital gains tax deduction and the governor vetoing the repeal of a hotel-motel tax bill, Oklahoma Education Association President Alicia Priest told reporters on Friday.