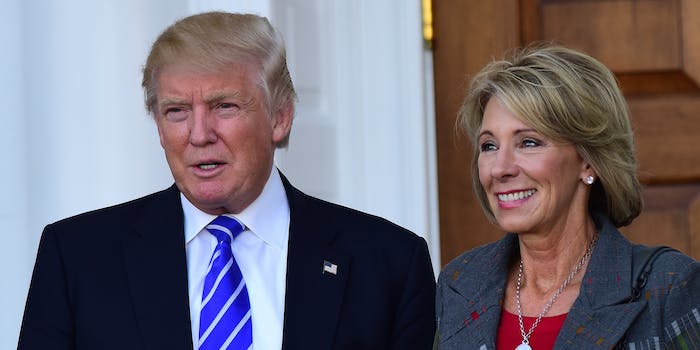 Photo via a katz / Shutterstock

She has also donated hundred of thousands of dollars to anti-LGBTQ causes.

President-elect Donald Trump’s transition team continues to shape up despite plans for recounts and reports of electors resigning. Among already problematic picks like Stephen Bannon and Jeff Sessions, Trump has appointed Michigan’s Betsy DeVos as secretary of education. DeVos has ties to pro-common core organizations, supports voucher programs and for-profit education, and has no experience working in a school environment.

She and her husband have also donated hundreds of thousands of dollars to groups opposing same-sex marriage and organizations supporting conversion therapy. According to Think Progress, DeVos “would have the power to promote those causes in schools across the country by weakening anti-discrimination protections for LGBTQ students.”

In 2004, DeVos and her husband donated $200,000 to a campaign in Michigan that ultimately amended the Michigan constitution to ban same-sex marriage. According to Politico, she’s also donated hundreds of thousands to a pro-conversion therapy organization called Focus on the Family and many members of DeVos’ extended family have given money to anti-LGBTQ causes, including efforts to strike down marriage equality by supporting California’s Proposition 8.

As education secretary, she has the potential to make life much harder for LGBTQ students across the country. In Texas, Sen. Konni Burton is doing just that by expanding the language of an existing bill to give school faculty permission to out students to their parents.

But there is some good news for LGBTQ youth and families. A county in New York has proposed a bill that would locally ban conversion therapy—and because sometimes comedy and irony can be the best remedies to fear, the bill is called PENCE: Prevention of Emotional Neglect and Childhood Endangerment.