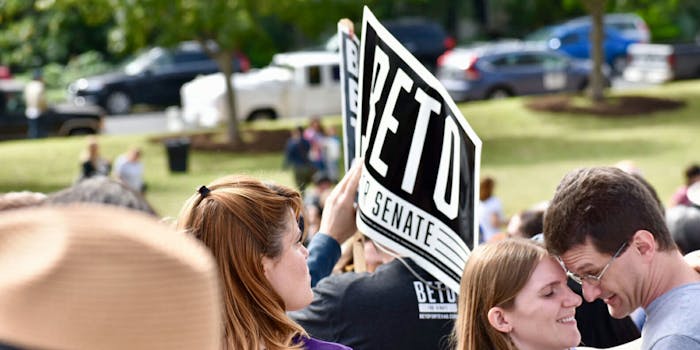 Is Beto ready for the backlash?

In August, he took a bold step in expressing his support for NFL players kneeling during the national anthem to protest police brutality against the Black community. His popularity was rising during his campaign against Sen. Ted Cruz (R-Texas), with a 97 percent lead among Black voters. Prominent voices like LeBron James and Beyoncé publicly supported him. He even reportedly drew the largest crowd on a campaign trail since former President Barack Obama.

But just a year before gaining popularity, he voted for a bill that seemingly counters the mission of the Black Lives Matter movement. The Thin Blue Line Act, introduced in March 2017, calls for death penalty to anyone who kills or attempts killing “a law enforcement officer, firefighter, or other first responder.” The legislation has been denounced by civil rights organizations, and the Hill called it “misguided and needlessly duplicative.”

The American Civil Liberties Union opposed it soon after it was introduced, calling it “duplicative and unnecessary.”

A policy director at the Legal Defense and Education Fund also called it “misguided” and urged people “to learn about and work to implement some of the reforms that will transform policing to the benefit of all.”

The act was also criticized for being a measure of support for law enforcement officials in the face of protests against police brutality. It is deemed especially concerning for communities of color since they are disproportionately affected by both police brutality and capital punishment.

The Leadership Conference on Civil and Human Rights, a coalition of 200 national organizations, said the act doesn’t take into account this disparity, pointing out that even though there are statistically more Black victims of homicide, the majority of people getting capital punishment are for killing white victims. At the same time, Black people make up the majority of people on death row.

It appears contradictory, then, that despite his open remarks about the NFL players taking a knee which implied a strong a support for the Black community, O’Rourke supported this controversial bill which affects the Black community’s protests against police brutality. And people on Twitter are taking note:

Is Beto O'Rourke yet another candidate who pandered to black voters while pushing other agendas? https://t.co/TvAmrWjb2H

Beto is a #BlueLivesMatter stan. Do not be fooled by a head of good hair and your Kennedy nostalgia. https://t.co/iL2uzCr7H1

I’m not supporting Beto, because he voted against #BlackLivesMatter https://t.co/znI7geNvBx

O’Rourke, a Democratic presidential contender who is expected to run in 2020, has yet to address the backlash.