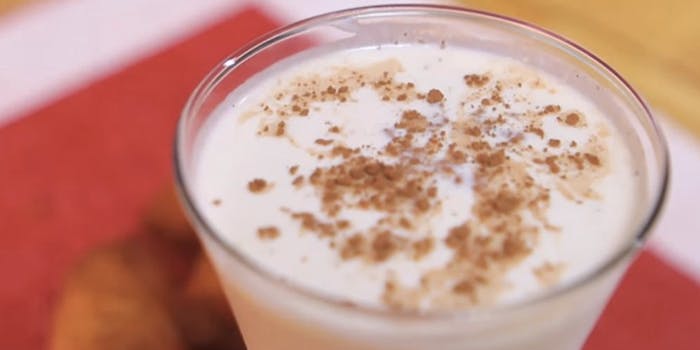 For the first several decades of life, I intentionally avoided eggnog. Perhaps childhood allergies to eggs and milk protein had something to do with it.

But then there was a fateful day living in the land of all things coffee when I sampled a Starbucks seasonal latte that featured a dollop of eggnog. Where have you been my whole life?

While I can’t honestly say that eggnog is a staple of my personal holiday menu, it’s a fascinating and versatile concoction that can be prepared in myriad ways and used as an ingredient in recipes ranging from pancakes to cupcakes. In recent years, as commercials for cholesterol-lowering meds have taken over primetime, healthier ways of preparing eggnog—including vegan methods—have become an acceptable (and often delicious) option.

Patrolling YouTube for eggnog recipes yields a variety of flavor profiles that feature booze-enhanced and non-alcoholic choices, depending on your audience. Other than imagination and a good blender, the only common denominator across these eggnog brews is the resulting white mustache that follows a big gulp of these creamy delights.

Since experiencing that wondrous mixture of heavy caffeine and the sweet/savory taste of eggnog all blended together in a red holiday Starbucks cup, I have been trying to replicate the formula. If you want to avoid waiting in line for your souped-up daily coffee jolt, you can try making an eggnog latte at home.

The Tipsy Bartender (Malorie Collier) calls herself the Martha Stewart of booze. Combing through her popular channel on YouTube—with more than 1.2 million subscribers—an adventurous drinker can learn how to make such cocktails as Santa’s Butthole (I couldn’t make that up), the Alien Brain Hemorrhage Shot, and the Zombies Brain Shot.

To combine the richness of a smooth eggnog with the sensation of watching the room spin around sideways, the popular YouTube mixologist offers a recipe of a tequila-laced eggnog. My sense is any sort of non-sweet clear hooch will do the trick.

Nothing could be more wonderful than lounging on the beach during Christmas, sipping on a holiday adult beverage. In the words of Jimmy Buffett: “They’re freezin’ up in Buffalo, stuck in their cars; I’m lying here ’neath the sun and the stars.”

Just because the nights are tropical doesn’t mean you have to do without a typical cold-weather refreshment. In countries with a Spanish heritage, eggnog is prepared with rum and cream of coconut (which is different from coconut milk). This video goes through the steps to prepare a proper conquito—a Latin-themed eggnog.

As a fan of the blokes from Sorted—led by chef Jamie Spafford—I enjoy the clever twists these gents put on traditional recipes. Their eggnog variation includes cherry brandy and a side of ginger snaps. They sure make it look easy.

On the day after Christmas, and all through the house
Nothing’s there in the fridge but some leftover grouse.
Breakfast is needed, and everyone is in bed;
Take your leftover eggnog and a nice slice of bread.

With apologies to Clement Clarke Moore, making breakfast for your guests after a day of opening gifts and gorging on fruitcake can be a challenge. Chow offers a simple way to mash together the remaining eggnog in your fridge with bread to come up with a nice way to rekindle memories of a happy holiday.

In case you missed the memo, one of our favorite YouTube funnyman vloggers, Shay Carl, is on a health kick. The man who has put himself and his brood in the video spotlight recently admitted he was facing some health issues, having put on some of extra weight. As inspiration to others, he now offers tips on getting and staying fit.

To enjoy holiday traditions without sacrificing taste, Ron, a member of Team ShayLoss, serves up a vegan version of eggnog. As vegan, I would add that going the extra step of making your own almond milk (as shown in this clip) is great but unnecessary. These days, there are a surprising number of nut milk options available, even at big-name supermarkets. As a disclaimer, I must also add that while vegan eggnog is quite good, it does lack the sweet/savory kick of the real thing, but your LDL numbers will thank you.

Yes, it sounds gross. But after watching this recipe, which offers a way to serve eggnog as a starter course for a holiday meal or as a dessert, or even a palate cleanser, the concept will make sense.

For fans of meringue, eggnog soup will be a memorable treat. I suggest not telling guests what they are eating until after you receive a round of compliments and requests for the recipe.

A surefire way to slip eggnog into your holiday desserts—even for those who claim not to like the taste—is to use it in your baking.

The ever-popular Laura Vitale shows how to make some great seasonal cupcakes using eggnog as one of your wet ingredients.

Interesting recipes have many origins, but a trailer park is rarely one of those sources. Jolene Sugarbaker (a play on the sisters from Designing Women) cooks from her double-wide in The Trailer Park Cooking Show, churning out some fairly sophisticated fare.

In this clip, Sugarbaker (what a perfect name for a pastry chef) displays a deft hand in her cookie making which belies her over-the-top makeup and Walmart cashier outfit. This homespun cook, who whips up a mean tater tot breakfast casserole, deserves more than the few hundred views her clips get on YouTube.

Holland is a lovely place to spend the Christmas holidays, as the Dutch really pull out all the stops.

For such a creative lot that is known for some original, creative spirits, it’s no wonder regular eggnog just doesn’t do it for the folks in Amsterdam and beyond. In place of the customary blend of eggs, sugar, cream, and spices, the Dutch have Advocaat. What makes Advocaat different (and perhaps more creamy) is the use of unpasteurized eggs and dairy products which is generally a no-no in the United States.

In addition being served as an aperitif, Europeans enjoy Advocaat on top of waffles or as an ingredient in ice cream. Since it’s a little late to book your flight to Schiphol, here’s a recipe to make your own.

Have a great and safe holiday season. Bottoms up!