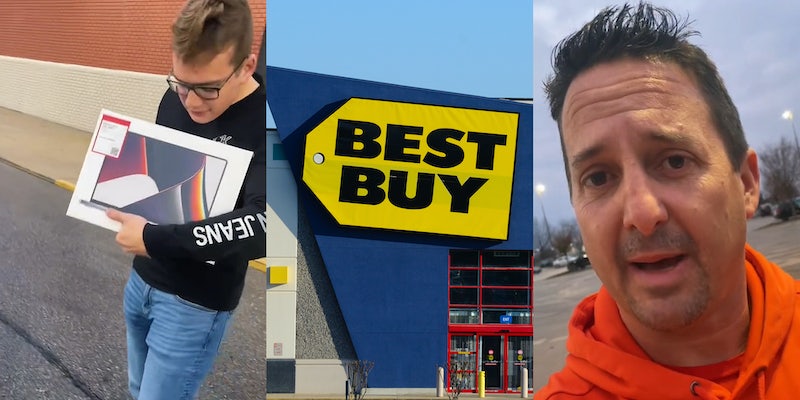 ‘I guess it worked’: Best Buy customer walks out holding ‘$3,200’ in purchased goods because he didn’t want to pay 11 cents for a bag

‘This is Kentucky and it doesn’t happen here.’

A TikTok user says he was asked to pay 11 cents for a bag after completing a purchase for over $3,000 worth of merchandise at a Best Buy location in Louisville. The assertion sparked debate on TikTok.

Plastic bag taxes have been introduced around the world in an attempt to curb the usage of disposable plastics.

It’s unclear where Matt made his purchase. Regardless, the attempt to charge him for a bag did not sit right with him.

“What are you doing to give your customers a less than stellar experience?” he asked in the video’s caption, addressing Best Buy. The video currently has over 376,000 views.

However, there have also been failures.

In an email to Daily Dot, Matt says that the point of his video was being misinterpreted and that his true point was about how the policy had been rolled out.

“I have zero issue with them charging for bags,” he wrote. “I pay for bags at businesses all the time. My point was that it wasn’t mentioned until after we had already paid for the 5 items, which at that point I’m not pulling my [credit card] out of my pocket to buy an 11-cent bag.

“The 2nd point is when someone spends $3,200 on 5 items, the cashier handing them a bag regardless should be part of their business practice,” Matt added.

“Turns out that Austin’s residents were buying (and discarding) trash can liners now that they weren’t getting plastic bags for free,” Lucy Bayly wrote for NBC News.

Back on TikTok, some users supported Matt in his anger about the bag fee.

“I don’t care how much I buy at Best Buy I’m not paying for a bag either,” one user wrote.

“I’m not paying the 11 cents either,” agreed another. “It’s the principle not the price.”

That said, many users said that Matt’s decision to forgo the bag proved the idea’s effectiveness.

“I guess it worked!” exclaimed a commenter. “That’s literally the entire point of the regulation. You didn’t take a bag that you didn’t need.”

The Daily Dot reached out to Best Buy via email.