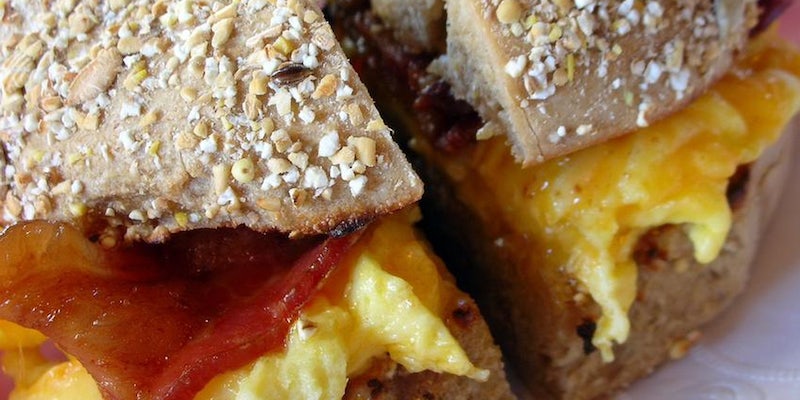 We found the best bacon, egg, and cheese sandwiches in New York City

There's no city in the world that makes better B.E.C.’s.

New Yorkers need to live in walking distance from a deli for one gooey, delightful reason: the bacon, egg, and cheese sandwich.

When people move out of the city, the one complaint I hear most often is that it’s impossible to find a good bacon, egg, and cheese sandwich (or “B.E.C.” for short). There’s a simple explanation for this: Despite being just as simple as any other deli creation, the B.E.C. is very much a product of New York. There’s even an upcoming restaurant that exclusively sells B.E.C. sandwiches.

New Yorkers seem to have been eating B.E.C.’s since the invention of the diner in the early 1900s. (Numerous coffee shops from that era have fried egg sandwiches and the like on their menus). The phrase “egg sandwich” popped up on New York Public Library menus starting in the 1930s and continued to appear on menus through the late 1960s, when a McDonald’s franchisee invented the Egg McMuffin. The introduction of the B.E.C. in the fast-food space solidified its place in the greater American culinary landscape.

We ate B.E.C.’s then and continue to eat them now because they’re efficient, convenient, and ubiquitous. There are no fussy condiments required, no fancy sauces or cutlery. Sure, B.E.C.’s aren’t exactly good for you, but something about them feel balanced and complete. The salt and fat of the bacon combined with the fluff of the egg remind you that you don’t need to supplement this sandwich with a yogurt or oatmeal. At the end of the day, all you need is the B.E.C. to satisfy your hunger. 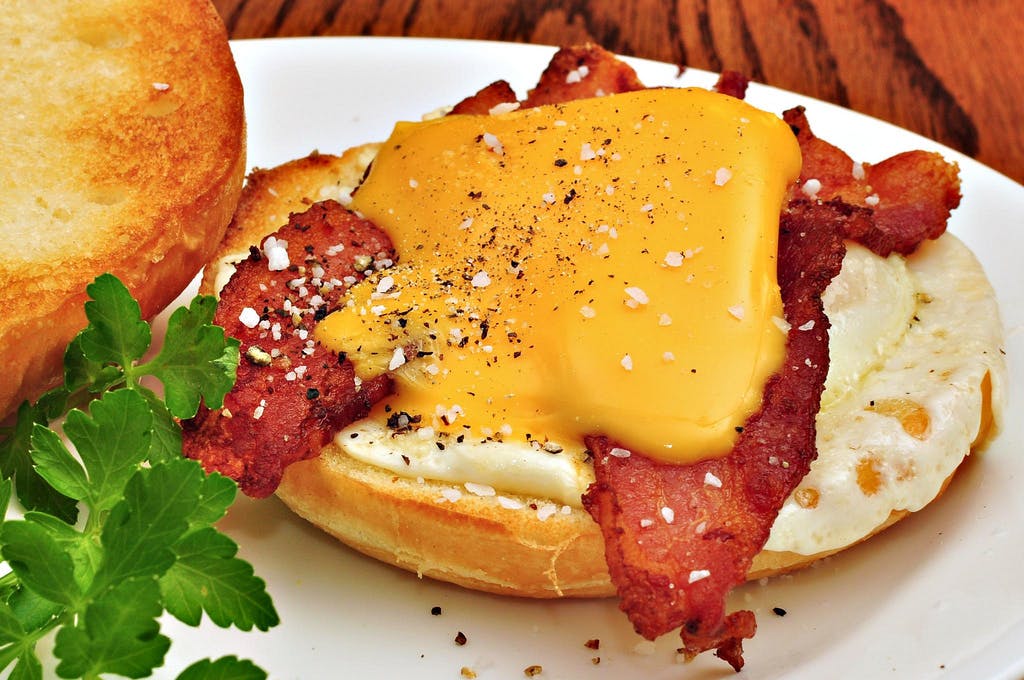 Yet the B.E.C. is far from universal. For whatever reason, it’s near impossible to find a solid bacon, egg, and cheese sandwich outside of New York, unless you settle for a pale imitation for the real thing (e.g., an Egg McMuffin). If you’re a genuine B.E.C. aficionado, you only have one real option: never leaving New York City. For these purists, we present to you a guide to finding the best bacon, egg, and cheese sandwich in Manhattan.

There are four basic ingredients that make up the B.E.C.: bacon, eggs, cheese, and bread. Some people prefer to douse their B.E.C.’s with hot sauce or ketchup, or salt and pepper, but for the purposes of this column we’re going to stick with the basics. (Also, ketchup ruins eggs, so stop doing that.)

First, let’s discuss the egg, widely considered to be the heart of the sandwich. Unless you specifically request otherwise, most places will do some form of scramble, ranging from a fully mixed mini-omelette to a fried egg with a broken yolk, to ensure that you don’t have yolk dripping down your arms while eating. The deli standard is American cheese. (Cheddar is also acceptable, but most options beyond that start getting too fancy.)

The sandwich should have no more than two or three thin slices of cheese, and they should be fully melted. The bacon works best when it’s not soggy, but not too crispy either, because then it has a tendency to shatter and crumble out of the bread.

Which brings us to the bread, the ingredient that literally holds the sandwich all together. Traditionally, delis use a Kaiser roll, a crusty and firm roll with a spiraled top that supposedly originated in Austria. The roll is sturdy enough to hold all the ingredients in and pliable enough to bite into. Regular toast tends to be too light to support the structure of the B.E.C., and biting down on a bagel’s outer crust more often than not sends the slippery egg and cheese shooting out of the side. An English muffin can be an adequate alternative, but given the option, we’ll stick with the roll.

Ordering a bacon, egg, and cheese on a roll should consist of just that, bacon and one egg and American or cheddar cheese on a roll. You should not be prompted to specify how many eggs or what type of cheese. You may be asked about salt and pepper or other condiments, but a griddle guy asking “Swiss or gouda or what?” is an indicator of someone who clearly hasn’t been doing this for very long.

So now that we have the criteria, how does it taste? There was no better way to test my thesis about the perfect bacon, egg, and cheese than to find one where most New Yorkers find them: at a deli.

So: Where to find the best B.E.C.’s in Manhattan? 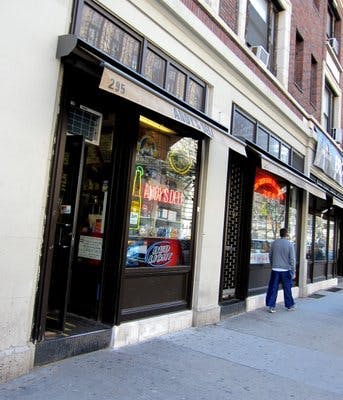 My first stop was Andy’s Deli on 74th Street and Amsterdam Avenue, which is usually full of construction workers and yarn-spinning old ladies picking up tubs of cottage cheese. These are good signs that a quality B.E.C. is in your midst.

The Andy’s Deli sandwich consists of one egg, fried with a broken yolk, topped with a slice of fully melted American cheese and a lightly crunchy layer of bacon. I usually specify a sprinkling of salt and pepper, and there was enough that you can see it melt into the cheese. The rolls are fresh and relatively flat, so they do not continue to dry out what should be a moist and flavorful sandwich. Basically, it does the trick and can be scarfed down in a block before descending into the subway or left to steam in its wax paper cocoon before opening at your desk at work.

Andy’s is fairly typical of a New York City deli, which is where you’re most likely to find a quality B.E.C. Seriously, any deli worth its salt in NYC makes a good bacon, egg, and cheese sandwich, and if it doesn’t, there’s probably another one within five blocks that will make one to the exacting, scientific specifications above. But if you don’t want to risk it and you have a few extra bucks to spare, you can also try the following dining establishments: 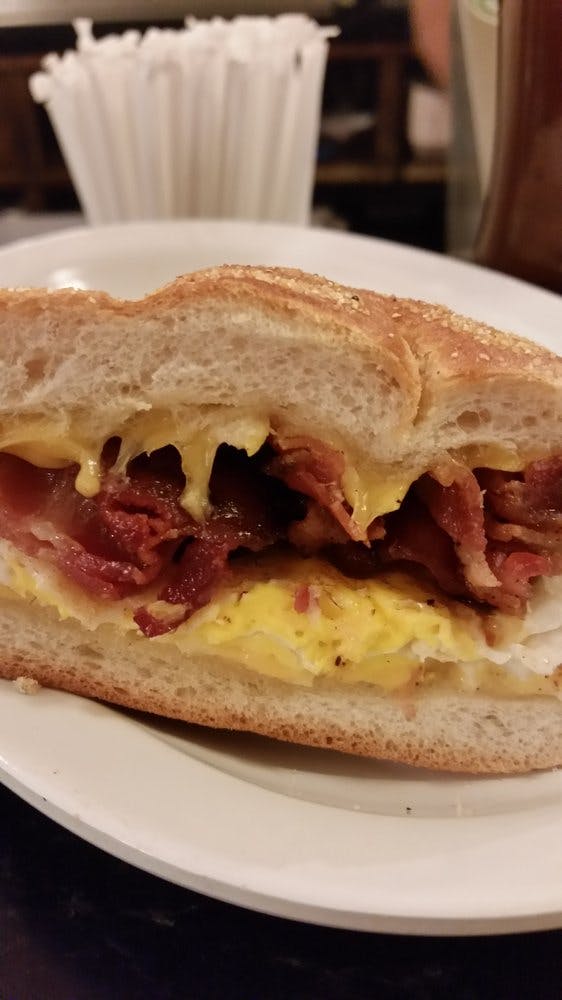 This old-school sandwich shop near Madison Square Park serves the platonic ideal of an egg-and-cheese sandwich. The roll has the lightest toasted crisp, and isn’t too thick to dry out the rest of the ingredients. The egg is also lightly scrambled, and thin layers of American cheese on both sides add just enough gooeyness. The bacon is well done, without being brittle and overpowering. 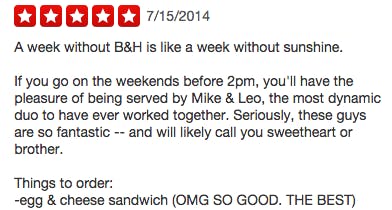 B&H, a meatless restaurant, does without the bacon, but the sandwich is no less satisfying. There are two main standout ingredients in the sandwich: the egg and the bread. The egg manages to be fully fried without producing a single dry bite. Even the whites stay fluffy and almost creamy while maintaining that signature crisp from the griddle. The other feature is the fluffy, sky-high, made-in-house challah this thing is served on. From the outside, it may seem like too much, but you quickly realize the volume is disproportionate to the density, and it feels like the egg and cheese are protected by a buttery cloud. 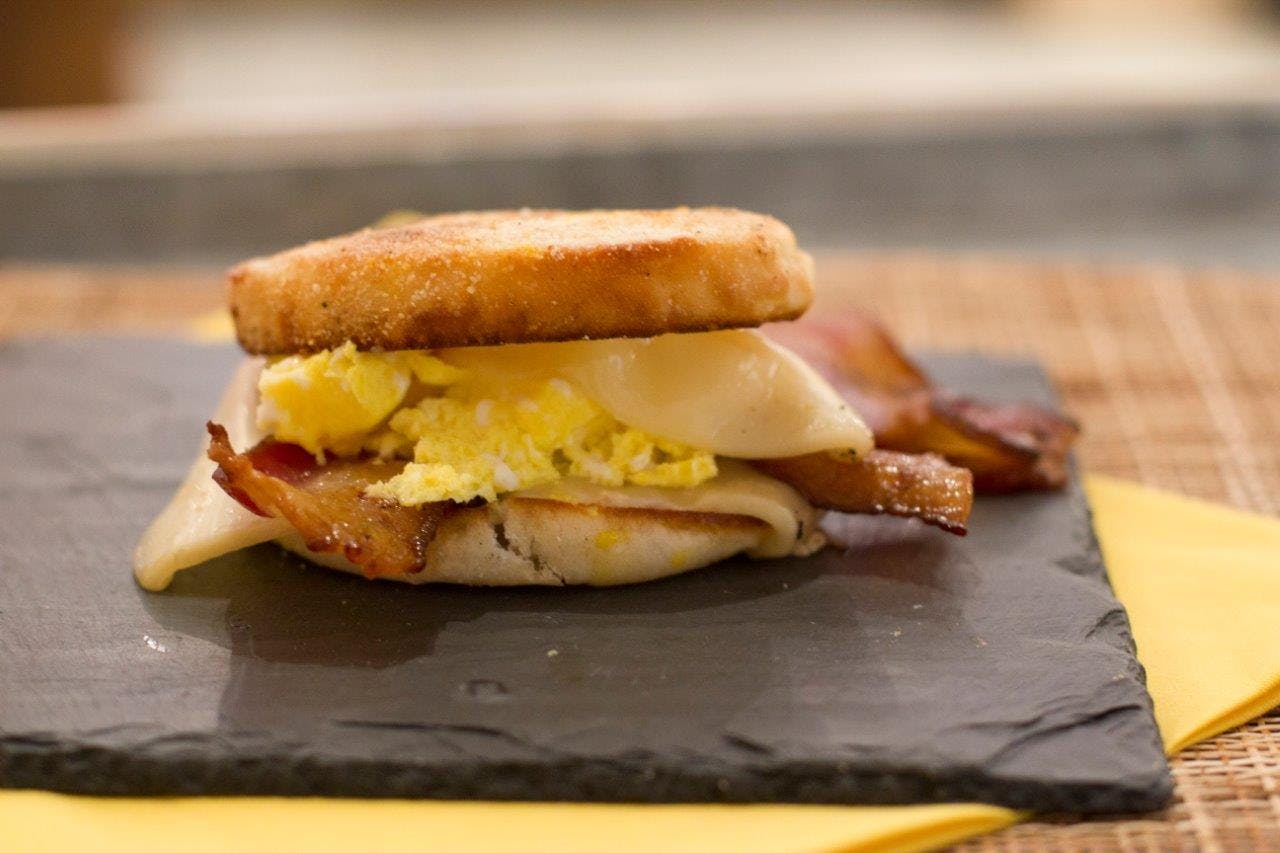 This schmancy version of the traditional sandwich is served on an English muffin with fontina, a fresh fried egg, and Nuseke’s bacon, the kind that doesn’t crinkle up on the edges when you cook it. You know, the good shit. However, it has the disadvantage of not exactly being portable. Unlike most egg-and-cheese sandwiches, which you can eat on the go, this sandwich oozes cheese and runny yolk, which you only notice when your hand is stinging because the yolk has dripped into the cut you got while grating carrots last night. Pay no mind. Just enjoy the ooey-gooey goodness.

Egg McRuffin, $14 (only available on weekends) 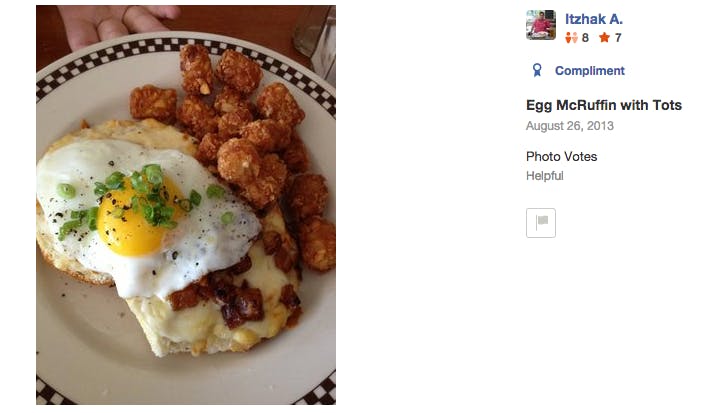 This gut-bomb of a sandwich is the best hangover food ever made; it’s custom-made for soaking up last night’s liquor. The Egg McRuffin consists of chopped smoked bacon and white cheddar and bechamel sauce on an oversized English muffin, topped with a fried egg and scallions, and served with a side of tater tots. It’s surprisingly easy to eat as a sandwich, and the bechamel adds a hint of McMuffin-esque creaminess.

6) The breakfast cart on 61st Street

$6 for sandwich and an iced coffee

This breakfast cart, at the corner of 61st and Third Avenue, offers the standard B.E.C., but if there’s also a chorizo egg-and-cheese option on the table, how are you going to pass that up? The crumbly sausage is scrambled with the eggs, and there’s more than enough cheese to keep everything in the sandwich soft. The chorizo gives it an extra spicy kick, though you can always add pickled jalapenos if desired.

When looking at the six-inch ciabatta hero sandwiches at Zito’s, which has locations in Park Slope and Bay Ridge, you might find yourself intimidated by the size and breadth of the sandwich and long for a more manageable Kaiser roll. Power through your inhibitions, however, because the ciabatta is surprisingly delicate and delicious. This powerhouse comes loaded with two fried eggs, as well as the meat filling of your choice, from sausage to mushrooms to pastrami. I opted for prosciutto and mozzarella, an Italian version of the B.E.C. The cheese is thick and still cool (as fresh mozzarella should be, in my opinion) and the prosciutto thin enough not to over-salt everything. 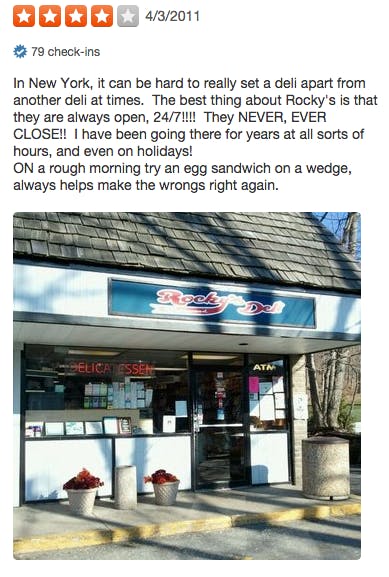 OK, so this one is a bit of a schlep. Also, why does the guy at the counter call a submarine sandwich a “wedge”? But for a small extra charge, the restaurant will top your B.E.C. with a patty of hash browns. This is a hack you can occasionally use at delis, but Rocky’s actually puts it on the menu, meaning they know exactly how it’s done. If the goal of a good B.E.C. is to take a complete breakfast on the go, topping the sandwich off with fried potatoes takes the dish to its logical conclusion.