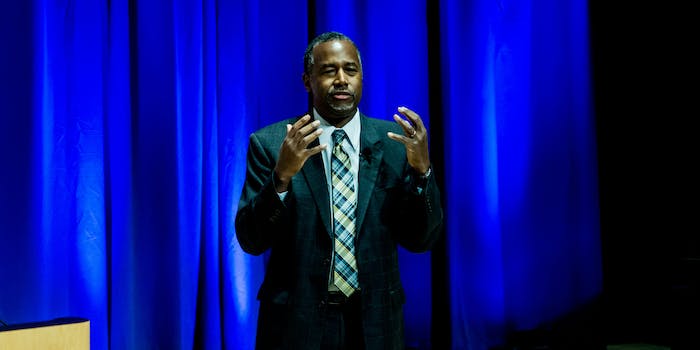 Carson says his mom helped him avoid living in poverty.

Secretary Ben Carson leads the Department of Housing and Urban Development, making him a major actor in securing housing for impoverished Americans. But activists are concerned that he will refuse to help lower-income citizens after he claimed that poverty is “a state of mind.”

During a radio interview this week with conservative media host Armstrong Williams, Carson stressed that impoverished people can rise out of poverty if they try hard enough. He also thinks that it’s not worth helping some Americans living in poverty because they “work their way” back to being impoverished.

“I think poverty to a large extent is also a state of mind. You take somebody that has the right mindset, you can take everything from them and put them on the street, and I guarantee in a little while they’ll be right back up there,” Carson said on the show.

“You take somebody with the wrong mindset, you can give them everything in the world—they’ll work their way right back down to the bottom,” he added.

Carson also implied that low-income Americans without family “accept the status of victim.” Instead, he felt parental support brings Americans out of poverty.

“If everybody had a mother like mine, nobody would be in poverty,” Carson said. “She was a person who absolutely would not accept the status of victim.”

Carson, a renowned neurosurgeon before he entered politics, famously grew up in low-income neighborhoods in Detroit and Boston, which has described as “the ghetto.”

“There were a lot of violent episodes there. There were rats, there were roaches,” Carson said in February 2016. “It was dire poverty.”

Progressive activists were furious with Carson’s remarks, arguing that he doesn’t understand the basic socioeconomic causes behind poverty. Others said that positive thinking simply won’t pay the bills.

Ben Carson said poverty is a state of mind.

Next month, I'm going to tell my landlord that I paid my rent with positive thinking!

"Being in poverty is a state of mind"-Ben Carson
Hey, jackass, at least HALF THE COUNTRY IS IN POVERTY! pic.twitter.com/77zHGKFZwT

BEN CARSON: poverty is a myth. like odysseus and the cyclops or
WIFE: ben please im trying to sleep
BEN CARSON: it's hocus pocus i tell ya

This isn’t the first time that Carson has come under fire for his personal beliefs. Carson previously likened slaves to immigrants and argued that gay marriage is a “Marxist plot.” He’s also blundered through official statements in the past, saying that it’s not his intention to do “anything that will benefit any—any—American.”