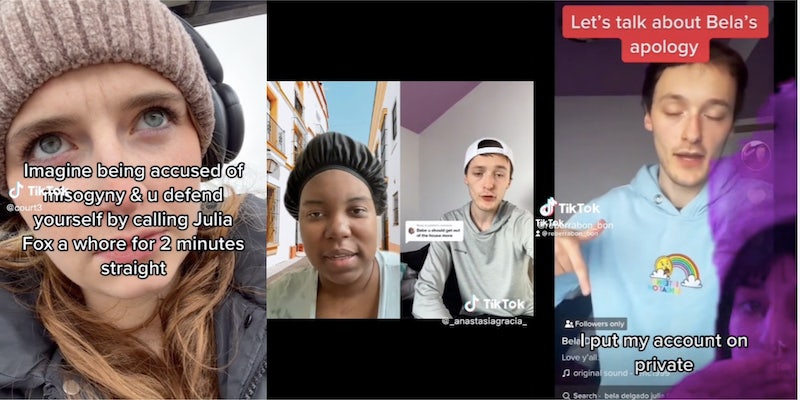 ‘He just blamed women for his misogyny towards a woman’: Popular TikToker driven off app, labeled misogynist following rant against Julia Fox

'He has no business telling women what is acceptable for us to be upset about.'

Popular TikToker Bela Delgado (@tenc1999) says they are “leaving” the platform after being called out for a “misogynistic” tirade against actress Julia Fox that went viral earlier this week.

In a now-deleted video, Delgado responds to a comment from Fox that reads, “Babe u should get out of the house more.” Her comment was on a video in which Delgado addressed the controversy caused by their song, “Annoying Ass Bitch,” which was called out for using a “misogynistic slur.”

“You were proudly banging Kanye West, a once very vocal Donald Trump supporter, while he was simultaneously running an extremely aggressive harassment campaign against his ex-wife,” Delgado says in the clip of Fox’s fling with the rapper earlier this year. “He was likely hate-tweeting her while in bed with you. You sold out every last one of your feminist morals when you decided to play dress up with Kim Kardashian’s sloppy seconds.”

They then continue to insult Fox, referring to her vagina as a “pork chop” that was “penetrated by a 45-year-old man who once actually called a woman a bitch as a slur.”

“Yet when I use the word in a joking manner, that’s where you draw a line in the sand of detestability?” Delgado asks.

While many viewers praised Delgado for clapping back at Fox’s brief relationship with West, many users put them on blast for responding to allegations of misogyny by making degrading comments towards Fox.

@alicemayjor #duet with @Bela Delgado this guy thought if i say it loud and nasty then it must be true also why does this man a known misogynist think he can dictate who is a feminist. Can men stop telling us who we are already?!?!? #juliafox #beladelgado ♬ Blade Runner 2049 – Synthwave Goose

“Women are not responsible for the actions of a guy they dated once!” one user commented on TikToker @allcemayjor’s video, defending Fox.

“Also referring to her body as meat and describing her sex life in a misogynistic way,” another wrote.

“He really said, ‘I’m not misogynistic, but also let me compare this woman to a literal piece of meat,'” a third added.

Following the wave of backlash, Delgado posted an apology video only to his followers in which they explain that they put their account on private and are “leaving TikTok.”

“I know a lot of you thought it was funny. You were laughing in the comments. But it was uncalled for,” they say in the clip. “If you guys know me, you know that’s not where my heart is. I was just mad in the heat of the moment because I had been mass reported and bombarded with hate videos from these radical feminists.”

At the end of the video, they clarify that they will not stop “using the word bitch.”

In a stitched video by TikToker Rebecca Faith Quinn, she calls out Delgado for continuing to “talk over women” as they attempted to apologize for making misogynistic comments.

“So your misogyny is the fault of people calling you out for misogyny? Even in this apology, he’s still talking over women and trying to tell women that they’re wrong about something that they’re upset about,” Quinn says. “He has no business telling women what is acceptable for us to be upset about…This is an accountability dodge.”

As for Fox, she uploaded a TikTok on Monday morning duetting a TikToker who was criticizing Delgado’s rant against her. She has since uploaded two more TikToks addressing her former fling with West, saying that the only reason she dated him was so he would get off “Kim [Kardashian]’s case.”

“I was just gonna write about it in my book, and then have you all buy it but I’ll just tell you guys for free,” she starts in a video responding to a comment accusing her of dating a “famously violent misogynist and antisemite.”

“The moment [West] started tweeting, I was out,” Fox says in the clip, referencing West’s tweets about Pete Davidson, Kardashian’s then-boyfriend, earlier this year.

“I realized pretty quickly that he wasn’t gonna take my help,” she says in the TikTok. “I sounded almost as dumb as you guys saying I should have done something to stop him. But I know, I was delusional, I thought I could help him.”

The Daily Dot reached out to Delgado and Quinn via email and to Fox via Instagram direct message.