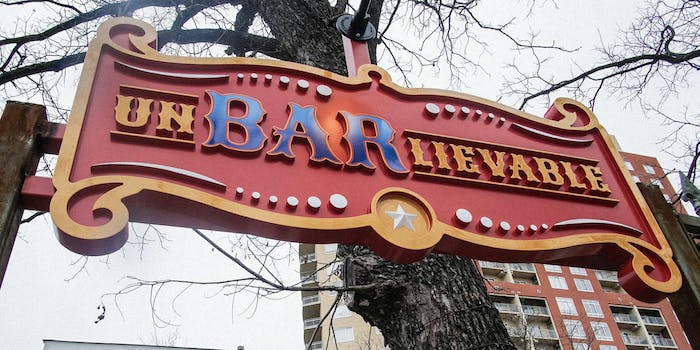 Bar under fire for calling customers racist names, decorating beers in a swastika

Wait, it gets worse.

It all started with a screenshot of a now-deleted post on Google reviews in which the owner, Brandon Cash, insults a patron for being born, calls the woman he was with a prostitute, and wrote, “since you had a towel on your head, I thought you were the new bus boy [sic].”

Cash’s response apparently wasn’t an irregular occurrence, either. When the Austin Chronicle requested links to other occurrences of social media missteps by the bar or Cash, the response was immediate and dramatic.

A review from March shows patron Rebecca Quintrell detailing her experience in which a server placed beers in a swastika pattern.

Soon, others piled on with tales of the bar and its owner’s unacceptable behavior. Most of the posts were blatantly racist, and a general air of dismissal accompanies every response the bar has given to complaints made by customers.

Strangely, the bar has a 3.7-star rating on Google, but otherwise, the reviews are pretty dismal. Complaints of bad service, poorly made drinks, and racism permeate most comments left on Google reviews as well as Facebook. Many of the comments have since been deleted, but the good people at the Austin Chronicle are hard at work compiling screenshots and links to out the bar’s inexcusable behavior.

If this theme bar is on a list of places you were hoping to visit in Austin, you might want to rethink your plans; that is if you are looking for a fun and easygoing night out. If you are looking for an interesting—albeit potentially offensive—story to tell, however, this is probably the perfect stop for you.

Update 10:55am CT, June 29: The Texas Alcoholic and Beverage Commission says it is investigating Unbarlievable based on a customer-reported incident regarding “imagery” and “language,” Austin’s local ABC affiliate reports.

On Wednesday, Cash issued a statement apologizing for his behavior:

“It is with profound humility that I issue this heartfelt apology. To those who I have hurt and offended, I am deeply sorry. My words and actions were wrong, inappropriate and inexcusable. They certainly don’t exemplify the values of a community that I love and care deeply about and my insensitive actions do not represent the views of my loyal and dedicated employees.
“Austin has been my home for over 30 years and I have worked hard to create hospitality experiences that reflect our unique, fun-loving Austin culture and attract patrons and guests who appreciate it. Unfortunately, my own intolerable actions have contributed to a negative environment that has detracted from that culture and vision. I fully realize that forgiveness may not come easily, but I am asking for it and I pledge to earn it. I am going to work diligently to earn back the trust of my customers, my employees and this community.”

Another bar Cash owns, The Goodnight, also took to Facebook to distance themselves from him and the accusations.