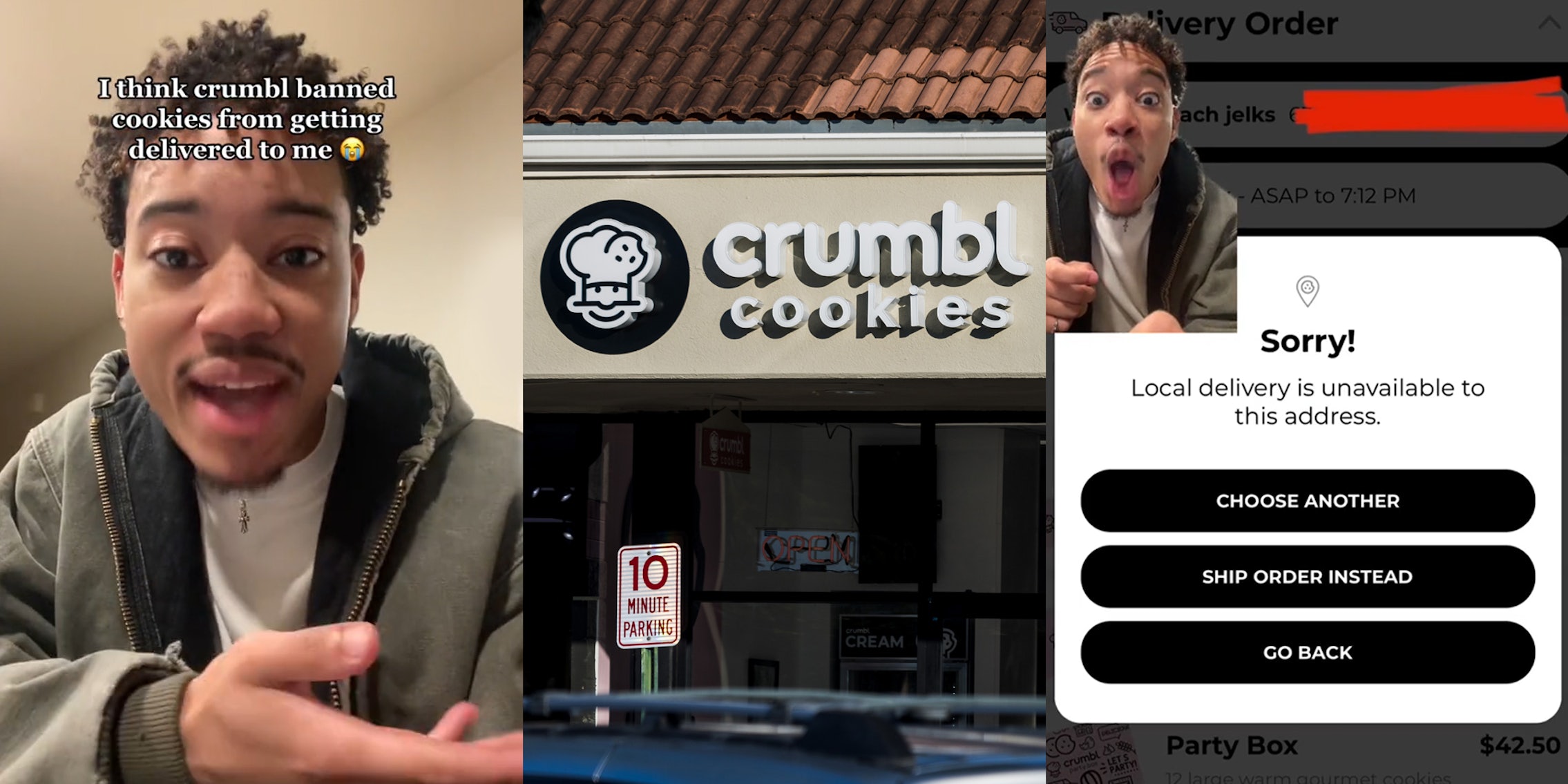 ‘Tell me why I think Crumbl banned my address’: TikToker claims he’s unable to order Crumbl cookies to his home

'THEY SAW YOUR REVIEWS AND SAID NOPE.'

A customer claims he is no longer able to receive deliveries of Crumbl cookies to his home address in a viral TikTok video.

The customer, popular creator Zach Jelks (@undos), states that he never had an issue previously receiving Crumbl deliveries to the same address and that he plans to go in person to the location to see why this has changed.

HOLD ON WHATS THE TEA!?!? should I go

“Tell me why I think Crumbl banned my address?” Jelks says at the beginning of the clip. “Cause I get it delivered I don’t pick it up.” He then begins to laugh before cutting to a screenshot of what happens when he attempts to get cookies delivered to his home.

“Sorry! Local delivery is unavailable to this address” the message says on his phone.

Jelks says that he’s ordered Crumbl to his place several times, adding that his followers have seen him upload reviews of the cookie brand’s offerings in the past. He said that he’s thinking of heading on over to the Crumbl store in person in order to “see what the tea is,” i.e. why the cookie franchise won’t deliver product to his address anymore.

In a previous video, Jelks reviewed several Crumbl cookies and while he enjoyed one of the flavors, he very strongly disapproved of the others in the box he received.

WHY DO YALL KEEP TELLING ME TO TRY THEM 😭😭😭

Crumbl responded, stating that the company’s “tech systems had an outage last week that caused this same error to appear for all users who were trying to order via delivery for a few hours on January 12th.” The company said that the problem was quickly resolved and should no longer be an issue.

Jelks shared the video on Jan. 19, though it’s unclear when he recorded the clip and attempted to place his order.

The cookie chain has been at the center of legal drama throughout 2022 with competing baked goods franchises Dirty Dough and Crave Cookies. Crumbl has accused Dirty Dough of stealing 66 of its recipes, but it’s also come under fire for allegedly leaking tidbits of legal information to popular influencers in an attempt to drum up some positive PR.

The brand also went viral in September 2022 when a TikToker filmed kids making their cookies at a Crumbl location, and it turns out that there are multiple Crumbl franchises that were accused of breaking child labor laws.

Some folks pointed out that many Crumbl locations are independently owned and that child labor laws are different when family members are working in a business. I.e. if you’re a 32-year-old couple with an 8- and 10-year old who want to help you mix cookie batter in the kitchen and box orders, you can hire them to do so, because they’re with their guardians while they’re on the clock.

Some viewers of Jelks’ post speculated that the location may have ultimately stopped delivering to his home because of previous negative reviews he had about the franchise’s offerings. “NOT THEM FINALLY DOING SOMETHING ABT IT,” one TikTok user wrote. Another penned, “THEY DIDNT LET THEM LITTLE REVIEWS SLIDE”

“They said ‘you are bad for business'” a third quipped.