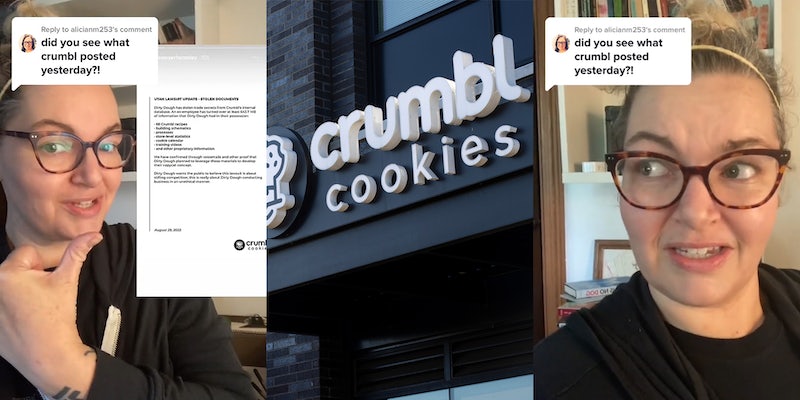 She did wind up doing a type of PR.

A TikToker is alleging that Crumbl Cookies tried to dupe her into doing PR for the company after a post of hers went viral.

TikToker @royaltyfreecassie said she was sent a statement from Crumbl by an anonymous email address after her first video covering the intellectual property suit. Crumbl is suing two other cookie companies for various copyright infringements.

In a video, Cassie says she was emailed a screenshot of a post the founders of Crumbl made in response to the lawsuit.

In the post, the founders allege that one of the company’s Crumbl is suing—Dirty Dough cookies—stole 66 recipes, reviewed store schematics and processes, and reviewed training videos before forming their company, essentially alleging that Dirty Dough ripped off Crumbl.

Dirty Dough did not respond to a request for comment.

“We have confirmed through voicemails and other proof that Dirty Dough planned to leverage these materials to develop their copycat concept,” the statement, which was posted by Crumbl’s founder on LinkedIn, said.

According to the TikToker, she believes that she was sent the statement to make a video about it by someone within the Crumbl Cookies company. She was sent the statement via email, which she said almost never happens, and the email address was anonymized. The person also did not respond to Cassie’s request for a TikTok handle so she could tag the user in a video. Cassie assumes it was an effort to get her to post about it.

Cassie is a self-proclaimed “licensing expert” and her first video about the lawsuit got over 300,000 views. She frequently creates content based on copyright and IP lawsuits and reacts to ones she sees as particularly egregious. Cassie did not respond to a request for comment.

Users in the comments were quick to delight in the cookie drama.

“It’s giving ‘win over the public perception and easily dismiss the suit later,’” one user wrote.

“Crumbl seems VERY engaged in their perception on tiktok. Not surprising,” another wrote.

“Ma’am, I own a cookie business. The drama in the cookie world is legit mind blowing! On the DAILY! 😂” said another.