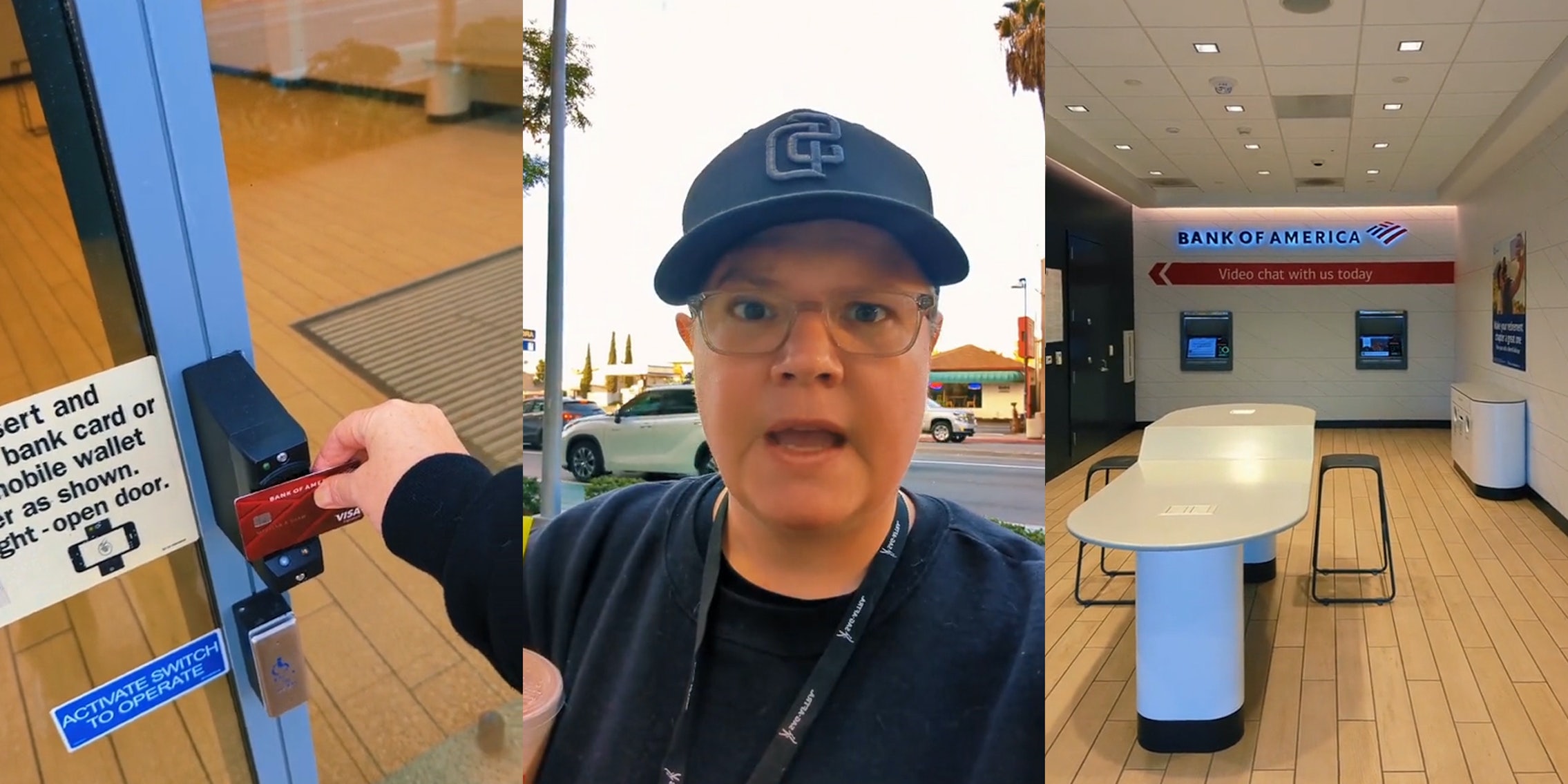 ‘This gave me the creeps’: Customer finds no employees in Bank of America—only the option to video chat

From human-free McDonald’s locations to art generated by artificial intelligence, human beings are slowly being removed from places where their participation was once thought to be a necessity.

An area where this change has recently arrived is banking, as TikToker Mel (@mel__in__sd) discovered in a now-widely discussed video.

In a clip with over 125,000 views, Mel taps into a Bank of America location, only to find it completely empty.

“You get in here, and… no one’s in here, and it has these two little rooms saying ‘Come in to video chat,’” Mel notes. “I don’t know if I like living in the future. This is fucking weird, yeah?”

“This gave me the creeps,” Mel added in the caption.

While these locations may seem new, Bank of America has actually been in the process of rolling them out for over 5 years, with the Charlotte Business Journal first reporting on this style of location back in 2017.

Still, the complete lack of personnel at the location has made some in the TikTok comment section uncomfortable.

“If I go in the bank, I am there to speak to a person. If I wanted to zoom I would from home,” claimed one user.

“No and I don’t like it. would never use it,” wrote another.

“I agree. I don’t like the future ways,” stated a third. “Some fast food places are like this. However, this is safer for employees.”

Others shared theories as to why Bank of America would develop a location like this.

“It’s so unhoused people won’t sleep there….” offered a user.

“Is for when the shut down the banks. There will be no way for anyone to forcibly get money,” alleged a second.

While many were opposed to using such a system, some were enthusiastic about it.

As one user wrote, “as an introvert, this totally my kind of bank.”

The Daily Dot reached out to Mel via TikTok comment and Bank of America via email.

Update 5:49pm CT January 12: In a TikTok DM exchange with the Daily Dot, Mel describes the experience of going viral as “strange.”

“…There used to be a [Bank of America] ATM only across the street from that little branch. I had used it many times over the years because it’s a block from my work, and I would just walk over it I needed cash for something,” Mel detailed.

“When that little branch opened about a year ago the ATM changed to a different bank. I had just never needed cash since then. But we were doing a workplace pool for lottery tickets this week and I needed to go grab cash to throw in my part,” she continued. “I walked over there expecting a normal mini-branch. But walked in to that and was completely taken aback. I’ve seen and used locked ATM vestibules before where you need your card to open the door. I’d never seen this bizarre virtual branch thing before with the little rooms and the sign acting like you were gonna go in one of those and get a home loan.”

Mel described the experience as “eerie.”

“…I was actually afraid to open the door for one of the rooms in case someone was in there,” she laughed. “It just felt spooky for some reason. And the bench there as though people would be coming in and waiting for a room to open up. I was trippin’, and as I left I thought ‘oh, I wanna take a picture of this to show my spouse.’ But as I did, I thought it might be a good quick little TikTok just asking people if this was a thing now. Then what happened, happened.”