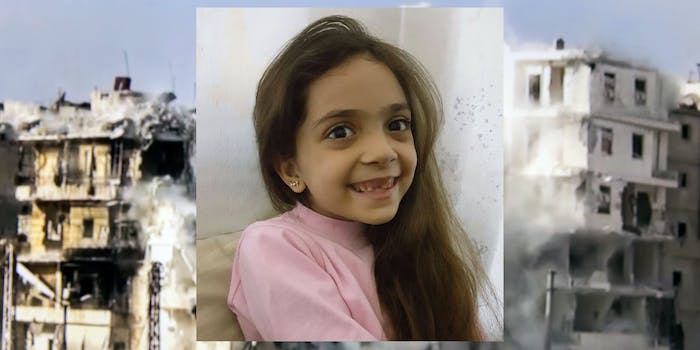 She and her mother have asked world leaders to save them.

Bana Alabed, the 7-year-old girl who captivated the world after she and her mother tweeted about the horrors of the Syrian Civil War in Aleppo, has been evacuated to safety.

Bana and her mother Fatemah, who has a media background and had the idea to start the account to show how children are suffering from the atrocities in Syria, have posted increasingly distressing calls for help as the Syrian and Russian armies amplified their attacks. They feared, like other civilians who remained in Aleppo, that they would be tortured or killed if they were captured or surrendered to the Syrian government. One U.N. official called the attack on Aleppo “a complete meltdown of humanity,” and humanitarian efforts have pushed for a ceasefire so that civilians can evacuate Aleppo.

At one point during the battle, Alabed’s Twitter account disappeared and had Bana’s followers fearing something had happened to her, but it later returned online.

As they updated their followers, they called on world leaders for help.

@AlabedBana and her mother make an somber, urgent plea to Michelle Obama @FLOTUS to help them make it safely out of east #Aleppo. pic.twitter.com/GlTd7O4ONQ

Dear @MevlutCavusoglu & @rt_erdogan please please please make this ceasefire work & get us out now. We are so tired. – Fatemah #Aleppo

Bana’s Twitter hasn’t been active in nearly a day, but a photo surfaced online Monday of Bana with a Turkish aid worker, revealing that she had made it out of Aleppo along with other children who were still trapped in the city. She is believed to have arrived on one of the buses that transported 4,500 civilians out.

“We endured endless bombardment in Aleppo,” Bana told Turkish news agency Anadolu, according to the BBC. “We have managed to escape the destruction, because our house was reduced to rubble. I would like to say thank you to all those who have been asking about our news.”

Fatemah also spoke of her relief that her message had reached others.

“We are happy because our voice reached all the world,” Fatemah told Qasioun News Agency. “[But] I am sad because in my country, I leave my soul there.”