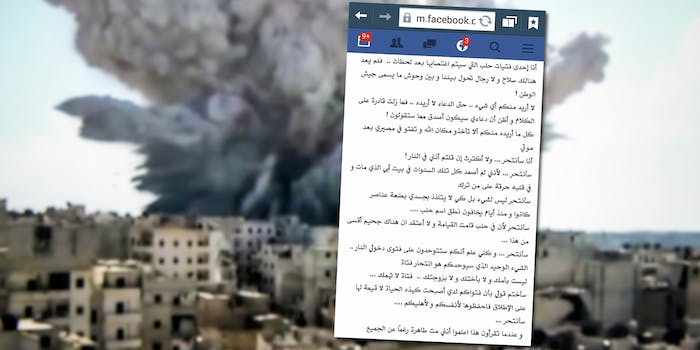 How you can help civilians in Aleppo

The Syrian government has reportedly taken control of most of Aleppo, according to multiple outlets. There are reports of the remaining civilians in the city, trapped in areas controlled by rebels, being shot on-sight by pro-government forces as they were trying to flee. One U.N. official called it “a complete meltdown of humanity.” Another said the Russian and Syrian governments were “accountable for any and all atrocities that the victorious militias in Aleppo are now committing.”

Online, the remaining civilians in the eastern part of the city have been leaving goodbyes and suicide notes, with many saying that if they are captured by the government, they will likely be tortured.

Perhaps my final message from E. Aleppo. Regime forces are closing in and bunker busters are raining down. pic.twitter.com/XgK0DSa08x

Understand this. I can't simply surrender and being captive. I am speaking out and this is a crime. I might then ask death and not got it.

Activist @Linashamy Lina Shamy's last distress call from besieged Aleppo: "All those who hear me must move now to save civilians in Aleppo." pic.twitter.com/26M9GAj9kG

From the outside, it’s easy to feel helpless about the crisis, but there is action to be taken. Those in Aleppo have called for others to contact the U.N. or Russian embassies and demand that civilians are allowed safe passage out of Aleppo, a trip that is about 4 kilometers or 2.5 miles. Writer Heidi Heilig posted relevant numbers and a phone script.

The script appears to come from a message posted by the White Helmets. “We are calling on you in the International Community to provide a safe passage out of Aleppo for the remaining 100,000 people,” they write. “We know that the U.N. has a plan to get us out across the four kilometres of Western Aleppo to safety: with a few dozen buses and lorries we could all be evacuated in 24 hours. However, we need you to guarantee the safety of their workers and our own… We can not believe that the world’s most powerful countries cannot get 100,000 souls 4 kilometers to safety.”

When we attempted to call, the State Department’s line was busy and the mailbox was full. You can also reach out to the Russian Embassy here.

The International Committee of the Red Cross also called for a humanitarian solution to the battles. “In order for this to happen, we appeal to the parties to put humanity ahead of military objectives,” it wrote. It is also accepting donations to provide food and medical care in the region.