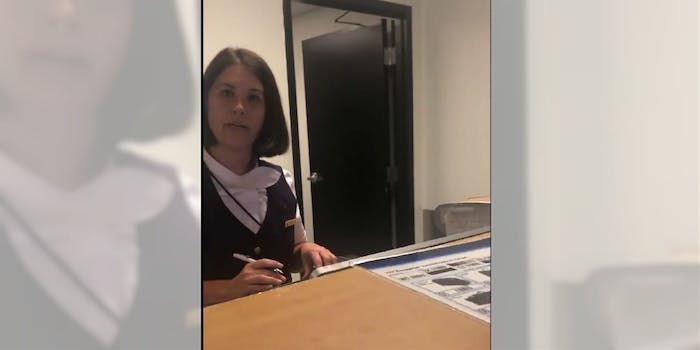 #BaggageClaimBecky calls police on Black customer for recording her

Yet another white person was filmed calling the police on a Black person for no apparent reason—this time at a baggage claim.

A woman tweeted last month about being harassed by a baggage claim attendant when she flew with Delta Airlines to Logan International Airport in Boston. The woman, identified as Arlene by the Root, explained how poor customer service led to a phone call to the police.

“When I walked in the office to inform the staff that my bag was ripped, I was met with attitude from four staff members that did not want to address my claim,” Arlene wrote in a statement on Twitter. According to the post, Arlene repeatedly asked a baggage claim attendant for the manager’s contact information, to no avail. The attendant, now referred to on Twitter as #BaggageClaimBecky, noticed Arlene recording the encounter on her phone and called the police.

Two weeks later and no one has reached out yet @Delta https://t.co/xRgplEDhUC

“I have never been so humiliated in my life,” Arlene wrote. A video of the encounter was posted to Twitter by a third party on Tuesday.

Arlene added that she left after the attendant called the police because she feared for her safety, given the increased awareness of police brutality in America.

“I was afraid when she called the state trooper, [given] all the of the unarmed police shootings in the world we live in,” she said. “I left the office because my victimization has already been criminalized.”

As the Root noted, the Transportation Safety Administration allows video recording that doesn’t interfere with security proceedings. The company that runs the airport, Massport, allows non-commercial filming on its properties, but its guidelines say, “Photography may prompt law enforcement officers or Massport personnel to approach you and ask you questions.”

Arlene told the Root that she did not believe the baggage claim attendant would have called the police on her if she wasn’t a Black woman. Her story is one of several that have emerged online in recent months after white people called the police on Black people for frivolous reasons. When the stories go viral, people on social media typically give the person who called the police a new, stereotypically white name, like #BBQBecky or #PermitPatty.

A USA Today report explained that the trend of calling out “Beckys” and “Pattys” exemplifies that Black people are frequently subjected to a high level form of patrolling in their everyday lives.

“What social media is doing is magnifying the elephant in the room in such a way as to reveal to white people the reality that Black people experience all the time,” Emory University professor George Yancy told USA Today. Arlene’s story is the most recent iteration of this pattern.

Arlene tweeted on Sept. 18 that her complaint with Delta Airlines still had not been addressed. According to the Root, the airline did ask her to remove the Twitter video.