It was boorish behavior that made its way around the globe.

When Lauren Crouch told a man with whom she’d gone out with once that she didn’t want to see him again, he reacted by asking for his money back for the coffee he bought her. After sharing this story via her blog, another man made a bold gesture to show the London woman that not all men are stingy jerks.

It all started in early November when Crouch met up with a man she met on Tinder and grabbed a coffee at Costa (a Starbucks-like chain.) She wrote on her blog, No Bad Dates, Just Good Stories, that the two of them chatted pleasantly for 25 minutes, until he asked if she wanted to come back to his place so he could cook her dinner. But he had ulterior motives: he had an Ocado delivery (the British equivalent of Fresh Direct) on the way, and needed to be there to meet it. She politely declined the compelling offer.

But the real fun started after the date. He asked Crouch to go out with him again and she declined, saying that she didn’t feel there was “chemistry.” He then asked her to pay him back for the coffee he bought her. Like a real gentleman.

Naturally, Crouch’s story went viral and she posted an update to the saga late last week. She said she received a lot of messages from hateful trolls, but also many from nice people wishing her well. One man in particular, who chose to remain anonymous, said the following “on behalf of all decent men everywhere”: 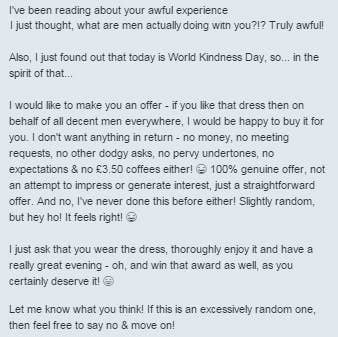 The dress he’s referring to is one Crouch shared on Twitter. She hoped to wear it to the Cosmo Blog awards, and this man wanted to help her feel her best on an exciting night for the writer.

Crouch wrote on her blog that she accepted the kind offer “and promised to pay it forward by doing a good deed for a stranger in return.”

But remember guys: You don’t need to buy a woman clothing to be a decent human. Just, y’know, don’t be a dick.