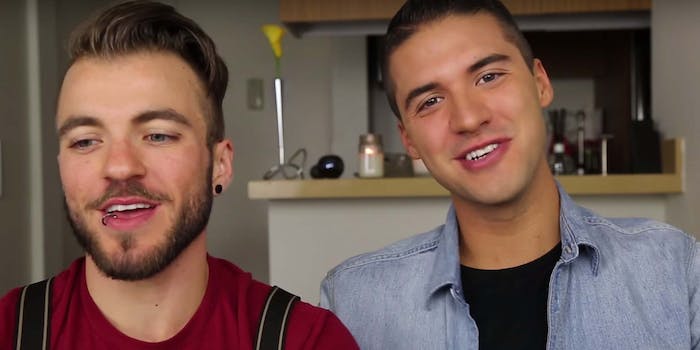 Model Aydian Dowling is on the cusp of becoming the very first trans man to be on the cover of Men’s Health magazine. On Friday, he spoke about his experience with queer vlogger Raymond Braun.

Dowling’s story began last spring when he entered Men’s Health’s Ultimate Guy Search, the magazine’s annual modeling contest. Today, he’s among the five finalists vying to be the cover model for the magazine’s November issue. Dowling is by far the fan favorite—during the voting rounds, he earned more than 72,000 votes, close to 50,000 more votes than the second-highest candidate.

Last week, Dowling traveled to New York to meet the other finalists and participate in a Men’s Health photo shoot. Meeting his fellow finalists—all cisgender men—was nerve-wracking, but ultimately validating, he tells Braun:

“My insecurities definitely showed up, because I felt like, ‘Oh, am I good enough? Am I good enough?’ But I met these four other guys, and we’re all just guys—different kinds of guys—trying to better our communities. Whatever’s important to us. And that was very inspirational.”

In the interview, Dowling highlights Caitlyn Jenner as one of his inspirations, crediting her appearance on the cover of Vanity Fair with the surge in public discourse on transgender issues that has taken place in recent months. “I think that this is the moment that people are curious about being transgender,” he says. “This is a great opportunity for people to educate themselves and hopefully we can take curiosity and turn it into an educational moment.”

At only 27 years old, Dowling is already an accomplished model; earlier this year, he recreated Adam Levine’s famous nude photoshoot for FTM. His hope, however, is that by becoming Men’s Health’s first openly trans cover model, he’ll be able to be a new icon of the trans movement, inspiring others to be confident in their bodies and follow their dreams.

“I think that the concept of ‘man’ has really changed a lot, and I think there’s a great opportunity to kind of open up that spectrum,” he tells Braun. He added that, if he is chosen as the contest’s winner, other young trans men “are finally gonna see something that they can aspire to.”

Dowling’s interview with Braun has been viewed more than 6,000 times on YouTube since Friday. He ends the video with powerful words that speak to everyone: “If you wanna take the actions and the steps and the work it takes to make your life better, then you can have a better life.”