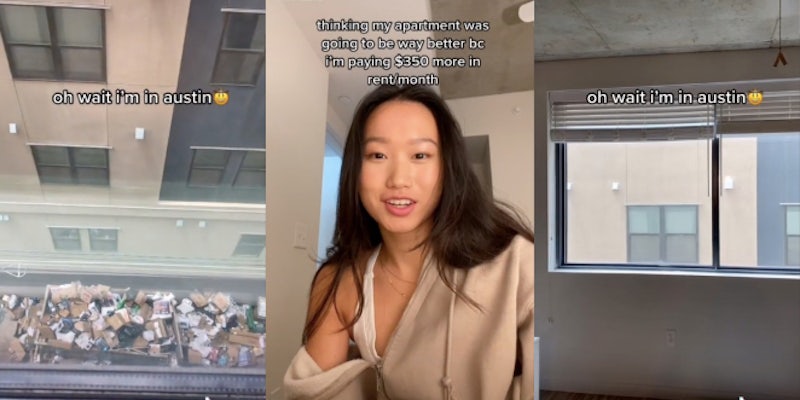 ‘Thinking my apartment was going to be way better’: Austin tenant puts apartment view on blast after $350 rent increase

'The amount of rent I'm paying in Austin and what I'm getting is honestly ridiculous.'

Rents in Austin, Texas, are skyrocketing. In June of this year, local NBC affiliate KXAN reported that “New data from Redfin shows Austin rents rose 48% from May 2021 to May 2022. The Austin area was the top metro with year-over-year rent jumps, followed by Nashville, Seattle and Cincinnati.”

“Thinking my apartment was going to be way better bc i’m paying $350 more in rent/month,” she wrote in the text overlaying the video. As her lackluster view and the alley full of garbage are shown, she adds, “oh wait i’m in austin.”

“MOONTOWER BRO I HATE IT HERE,” one user wrote.

“This is literally my view,” another shared.

Ironically, the building’s Instagram page specifically cites “Breath Taking Views” as one of the perks of the building.

“The amount of rent I’m paying in Austin and what I’m getting is honestly ridiculous,” offered a commenter.

“My parents said they felt bad for me when they came to visit from dallas,” stated a second.

“Felt this but in Dallas,” explained a further user.

Texas has no rent control laws, and residents are reportedly struggling to keep up with the rising cost of rent. An Out of Reach report from the National Low Income Housing Coalition, which was cited by Fox 4, found out how much an average renter needs to earn to afford a “modest” apartment in their respective state. According to the report, a full-time worker in Texas who can’t spend over 30% of their income on rent has to earn $22.54 per hour to afford a two-bedroom apartment.