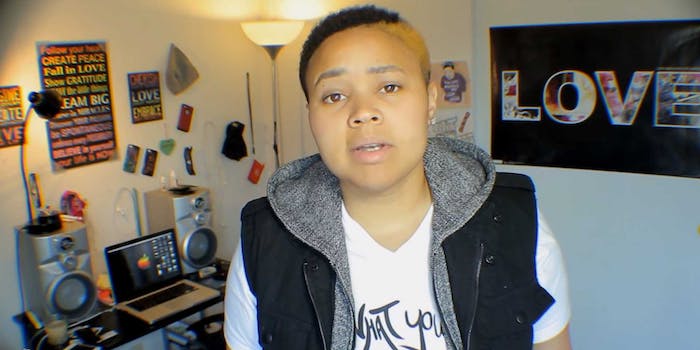 Hart demonstrates what would happen if she really wore what she loved.

You’re a woman who dates women. Why do you dress like a man?

Like a lot of lesbians, Hart, a YouTube comedian, is sick of hearing that. She’s received a number of comments from her viewers about the outfits she wears in her videos.

She’s open about her sexuality and love for women online, but her fans want to know why, if she loves women so much, she doesn’t dress like one.

“No. 1, I don’t dress like anyone but myself,” Hart says. But to further drive the point home, she demonstrates what would happen if she really wore what she loved.

For example, she loves watermelon.

Wearing nothing but a bikini made of watermelon and eating a piece of the fruit, Hart dances her heart out to the saxophone solo in SunStroke Project’s “Run Away” until her mother walks in on her.

Instead of asking her about her choice in clothing, Hart’s mom is more curious about why one half of the watermelon bra is bigger than the other. She ultimately decides she doesn’t want to know.

“Just because you love something doesn’t mean you have to dress like it,” Hart says, back in her own clothes.

Not that we’re opposed to all-bacon outfits, but she’s got a point.