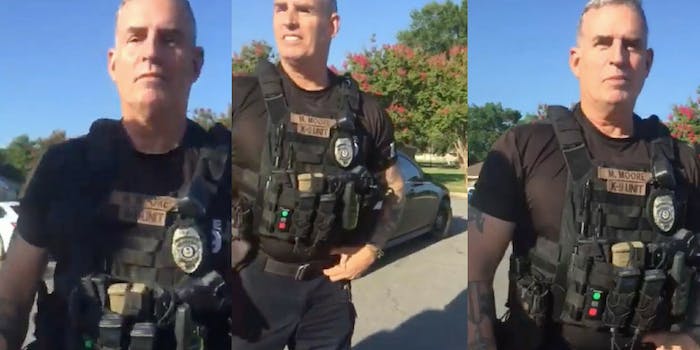 The men grew up there.

An Arkansas police officer has been fired after he was recorded telling former town residents, two Black men, that they “don’t belong in my city.”

In the video that went viral, England police officer Michael Moore tells the men that he knows everyone in the town and has never seen them before. However, the men grew up there and have an uncle who was an officer in the same police department.

According to station KATV, England Police Chief Danna Powell said in a press release Wednesday that Moore had been fired after an internal investigation.

At the time of the interaction, on July 21, the men had been filming a music video and told local station WFMY that they noticed Moore following them around as soon as they drove into town. They decided to approach Moore and let him know what they were doing as soon as they got to their final filming location.

In the video—recorded by one of the men, Demarcus Bunch—Shannon Scribner and Bunch approach Moore, who is standing outside of his police cruiser. They introduce themselves to Moore and then identify themselves as the nephews of Del Scribner, another England police officer. Bunch then says that they’re trying to record a video outside and noticed he was following them around.

“You’re recording right now? You know why? You don’t belong in my city,” Moore tells the men.

“But you understand, I know who my people are, right? Who belongs here and who doesn’t? We’ve got gang wars going on, we got all kinds of stuff. And I come from the big city, where this stuff’s small, OK? So, that’s cool. Do your thing,” Moore says.

“You say we don’t belong in your city, though?” Bunch asks.

“Can I say something? OK—I have never seen you here before and I know almost everybody here,” Moore says.

“Man, I grew up in 101. I graduated from England High,” Bunch responds.

“Well, good, well, good for you. My name is Mike Moore. OK? I’m not from here,” Moore responds. He then backs away, nods at the camera, and asks another person off camera to step away from his car because he was taking his K9 outside.

The rest of the video shows Moore from afar, taking his dog out for a moment before letting it back into the car, and ends after Moore begins driving away.

Shannon BigScribb Scribner‼️‼️‼️SHARE SHARE SHARE‼️‼️‼️After days of careful consideration,and proper documentation;we’ve been given the go ahead to post the video below.One would expect racial profiling and stereotyping in large cities but never England, AR. That was definitely the case on July 21, 2018 when my life along with my cousin, 2 of my nephews,and a few friends;was forever changed. In a city in which we grew up, attended school and still have relatives including our grandmother, we now all fear driving to or through England because of the one police officer presented in this video.

In the Facebook video’s caption, Bunch wrote that they waited to post the video until Aug. 7, after “days of careful consideration and proper documentation.” Bunch wrote that someone might have expected racial profiling and stereotyping in larger cities, but never in England, a town of just under 2,800 people, KATV reported. The town is 65 percent white and 33 percent Black.

“In a city in which we grew up, attended school and still have relatives including our grandmother, we now all fear driving to or through England because of the one police officer presented in this video,” Bunch wrote on Facebook.

“With all the racial discrimination that’s going on across the world, will I be another victim? Will I be a statistic?” Bunch later told WFMY.

Bunch and Scribner then talked to another uncle, Kevin Scribner, about the incident, who told them to go to Chief Powell, to give her the opportunity to perform her investigation. After 15 days without a response to their official complaint, the men then released the video on Facebook. It’s since received more than 27,000 views and 1,000 shares.

Bunch said he hopes Moore is unable to work in law enforcement again.

“Personally, I feel like the chief should be held accountable as well for allowing him to even continue to work as long as he’s worked after showing of the video,” Bunch told WFMY.