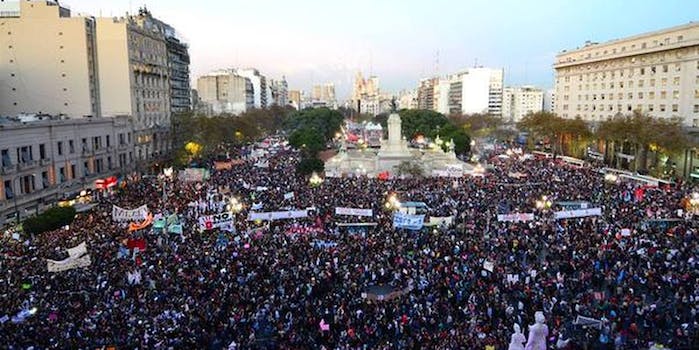 Women around the world are protesting femicide with #MiércolesNegro.

Women in Argentina are staging a national strike after the fatal rape of a 16-year-old girl, Lucía Pérez. Pérez died earlier this month in Mar del Plata, after reportedly being drugged, gang raped, and tortured. Under the hashtag #MiércolesNegro (Black Wednesday), thousands left work in Argentina—and around the world—to protest violence against women.

Organizers of the march are blaming this violence on machismo culture. “This violence is trying to teach us a lesson, it wants to put us back in a traditional role into which we don’t fit anymore,” organizer Sabrina Cantabria told the Guardian. “It’s not a specific blow by a specific man against one woman in particular, it’s a message to all women to return to our stereotypical roles.”

Violence against women has become a major issue in Argentina. Women have been protesting with #NiUnaMenos (Not One Less). But organizer Ingrid Beck told Americas Quarterly that she still hasn’t seen much action from the government. “I see progress in society, which evidently every day tolerates fewer of these situations and tolerates much less machista violence in general,” she said. “Socially, yes, I do think we’re starting to see some changes, but with regard to measures that the state has to take, I don’t see advances.”

Argentina’s anti-femicide law, adopted in 2012, supposedly gives harsher penalties to men who kill women when gender plays a role in the crime, but critics say the law isn’t being well-implemented; a woman is reportedly killed once every 30 hours in Argentina.

In a post credited to Pérez’s brother, Matías, he writes in support of the protests. “We must take forces and go into the streets to shout all together, now more than ever: ‘Not one less,’” he said (translated with Google Translate). “Only in this way, we will prevent thousands of more Lucias killed.”