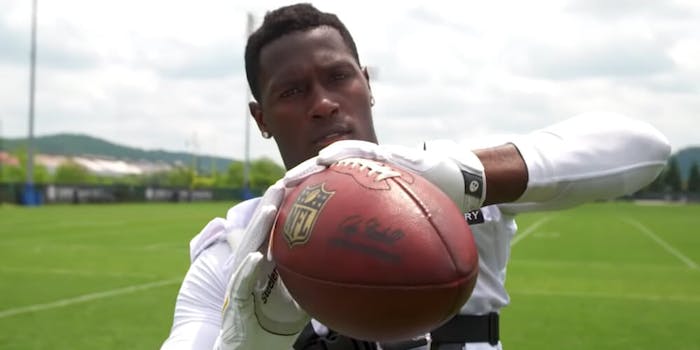 Antonio Brown sent ‘intimidating’ texts to an accuser, including a pic of her children

Brown called her a 'celebrity groupie' and a 'super broke girl with a lot of kids.'

One of the texts sent by Brown was a photo of the woman’s children.

New tonight: Antonio Brown sent our source from Monday’s story menacing group text messages, including a picture of her children with instructions for his associates to investigate her.

Her lawyer wrote the NFL calling for the intimidation to stop. https://t.co/rCTM8WSI6Z pic.twitter.com/QtONzBf7Ig

The woman, an artist, alleged that Brown approached her naked, with nothing more than a piece of cloth covering his genitals, while she was painting his mural in his home.

In the group messages–consisting of Brown, the woman, and others–the wide receiver claimed the woman was a “super broke girl with a lot of kids,” who only made the accusations against him for money and called her a “celebrity groupie.”

He also shared pictures of the woman’s kids. “Those her kids and ig Eric she’s awfully broke clearly,” he wrote.

He then requested someone he called “Eric B” to “look up her background history.”

The woman’s lawyer, Lisa J. Banks, released a statement, addressing both the NFL and the Patriots, demanding they put an end to the harassment.

“Our client … is understandably frightened by these text messages, which are clearly intended to threaten and intimidate her,” Banks wrote. “While she certainly qualifies as a ‘starving artist,’ she has never approached Mr. Brown, now will she, about seeking money to compensate her for his sexual misconduct, contrary to his allegations in the text messages.”

The first woman to come forward with accusations of sexual assault against Brown was his former trainer Britney Taylor. She alleges he sexually assaulted on two occasions in 2017 and raped her once in 2018. Brown similarly reacted to Taylor’s accusations by allegedly bullying her in an email.

In response to the texts and new allegations, the Patriots released Brown on Friday, ending his two-week career with the team.

“Just got fired on Friday,” Brown wrote on Twitter, confirming his release.

He also thanked the Patriots for the short-lived opportunity and tried to paint himself as a victim of an unfair attack. “Some people try to destroy you precisely because they recognize your power. Not because they don’t see it, but because they see it and they don’t want it to exist,” he posted.

Thank you for the opportunity @Patriots #GoWinIt