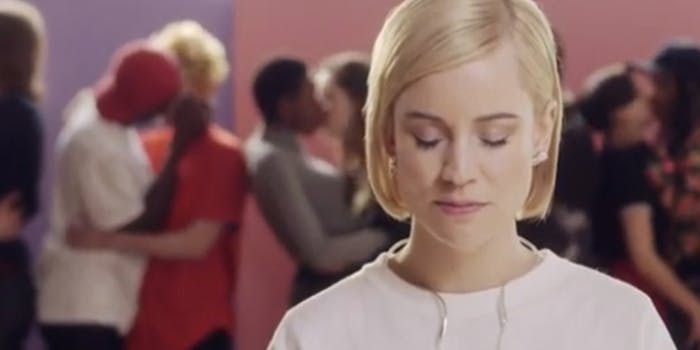 "I also still do not know who Annie is. I'm going to Wikipedia her later."

Right before the Winter Olympics started, Norwegian musician and DJ Annie released a video for a song called “Russian Kiss,” a pro-LGBT anthem aimed at Russia’s anti-gay violence and legislation. It was directed by famed experimental filmmaker and photographer Richard Kern, and features several same-sex couples making out and dancing.

Bailey Williams, a NYC-based writer, recently posted a blog about the experience of kind of, sort of accidentally ending up at the video shoot with her girlfriend. Her opening paragraph sets the scene:

Once upon a time I found myself at a Bushwick loft at 11am on a Sunday morning to make out on camera with my half Irish girlfriend for a Scandinavian music video to protest Russian treatment of gay people and I was there because I was promised fifty American dollars. In short, I was feeling very cosmopolitan, very Carrie Bradshaw.

But I was naive. I knew not what I had done.

The blog reads much like a short story, as Williams recounts how what she thought was just a Craigslist “odd job” turned into an awkward loft scene filled with dancing models and a director narrating, “in a sing-song voice of my nightmares,” how they should be “kissing, kissing, kissing, kissing, kissing.” Then there’s slow realization that she’s actually in a music video. In the end, she and her girlfriend were featured, but not kissing. The whole piece is worth reading for a look behind the curtain.

“I should have realized it was an Annie video when the email telling me to be there that Sunday was titled ‘Bailey & Alanna—Annie Call Sheet,’ but I did not,” Williams says. “I also still do not know who Annie is. I’m going to Wikipedia her later but right now I’m at work.”

She adds that “distilling gay rights down to the right to kiss (or even marry) is sort of glossing over a lot of ideas and problems… but I don’t want to shit on Annie’s vid. She seemed nice. She had on a pink sweater and had good hair.”

Has she watched the video since it’s come out?

“To be completely honest, I have not watched the entirety of the vid,” she explains. “I watch up until my three seconds because I’m a narcissist and then I lose interest and get sort of turned off the whole thing. I am actually extremely grateful that they didn’t include the footage of Alanna and I kissing because there’s something kind of revolting about watching people make out, gay or straight. I think that unites us all. We are terrible-looking slobber monsters. Plus I’m Facebook friends with my mom.”