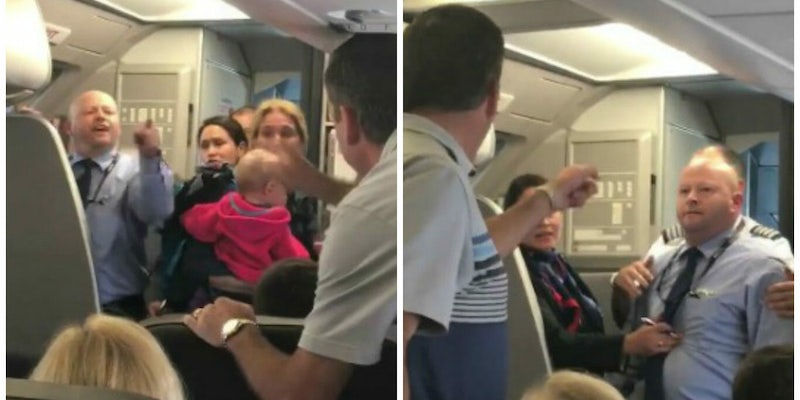 Yet another airline controversy.

Just weeks after a video of a man who was physically dragged off a United Airlines flight enraged the internet (and resulted in a mass creation of memes), another video has stormed the web involving an altercation on a flight from Friday.

In this instance, an American Airlines employee challenges a passenger to fight him after a woman holding a baby was allegedly hit with her stroller in the midst of an argument with airline staff. The employee has since been put on suspension.

It’s unclear when or how the conflict began, but the video starts with the woman already in tears, holding her baby to her chest and asking for her stroller back on a flight that was headed from San Francisco to Dallas/Ft. Worth on Friday. A passenger stands up to confront employees about the situation, and it’s audible enough to hear him say, “I’m not going to sit here and watch this,” before asking staff for the identity of the attendant that allegedly hit the woman.

Then, a man in an airline uniform emerges and yells, “Hey, you stay out of this!” before telling the passenger to hit him. The two quarrel for a couple of moments before the video cuts out.

According to multiple witness accounts, via Q13 Fox, the woman, who is from Argentina and flying internationally, brought the stroller on the plane. When a flight attendant tried to remove the stroller, there was some sort of dispute that led to the stroller striking the woman and just missing her baby.

Here was the scene.

OMG! AA Flight attendant violently took a stroller from a lady with her baby on my flight, hitting her and just missing the baby. Then he tried to fight a passenger who stood up for her. AA591 from SFO to DFW.

American Airlines has been quick to comment about the incident, releasing a statement Saturday morning. Wrote the airline:

We have seen the video and have already started an investigation to obtain the facts. What we see on this video does not reflect our values or how we care for our customers. We are deeply sorry for the pain we have caused this passenger and her family and to any other customers affected by the incident. We are making sure all of her family’s needs are being met while she is in our care. After electing to take another flight, we are taking special care of her and her family and upgrading them to first class for the remainder of their international trip.

The actions of our team member captured here do not appear to reflect patience or empathy, two values necessary for customer care. In short, we are disappointed by these actions. The American team member has been removed from duty while we immediately investigate this incident.

The viral video, which was posted on Facebook by Surain Adyanthaya, has been viewed more than 1.4 million times as of Saturday morning, less than 24 hours after the initial posting.

Twitter has (obviously) already seen the video, and the sphere is not silent. Some are applauding the passenger who stood up for the mom, while others are asking if bringing a stroller on a flight is even permitted. The airline, for the most part, is being condemned for its employee’s actions.

Did I miss something? I'm not really sure what the initial issue was here…. since when are you allowed to bring strollers on airplanes? https://t.co/29cLVr5vNk

There goes another airline's customer service reputation. Hit a woman with a stroller, @AmericanAir? https://t.co/B9jh32z9bk

Round of applause 2 the man who stood up for the woman & 2 kids on the American Airlines flight! Chivalry isn't dead…

@united : watch us knock a guy out@AmericanAir : hold my beer while I knock out a baby

United: "we had the worst PR nightmare for airlines in years"
American Airlines: "hold my beer"

At this point, despite the apology, the fate of American Airlines is irresolute. United Airlines was dragged into the mud on social media, and we expect nothing less for American. We also are expecting an endless supply of memes and GIFS to come soon.