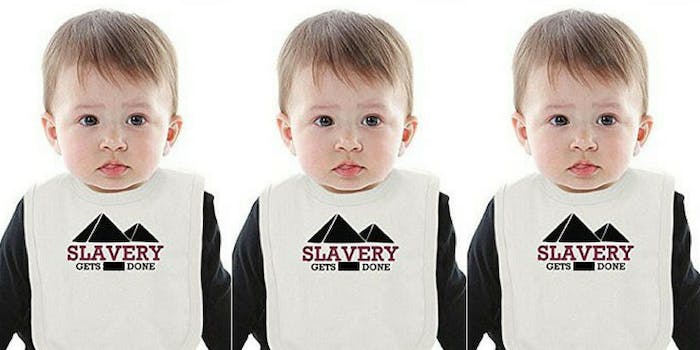 Who thought this was a good idea for children to wear?

Amazon is under fire for merchandise with the slogan “Slavery Gets Shit Done” under an image of the Egyptian pyramids.

According to Reuters, Amazon’s site carried these products from third-party sellers, and have since been removed from both U.S. and U.K. online stores.

“All Marketplace sellers must follow our selling guidelines and those who don’t will be subject to action including potential removal of their account,” a statement from an Amazon spokesman read. “The products in question are no longer available.”

.@amazon how lovely is this? A little white boy with a highly insensitive and ignorant ‘Slavery Gets Shit Done’ bib on. Hmm.. did they pick the cotton right amazon? Or no? Gotta love 2018, what a great start. #Amazon #BOYCOTTAMAZON pic.twitter.com/DKKLFH4JKJ

While the apparel is highly offensive for glorifying slavery—especially in a country that was founded on the institution of slavery and enforced slave labor for hundreds of years—it also makes light of the conditions of the 40.3 million people who still live as modern-day slaves.

Amazon declined to comment on the apparel to Fortune, and instead referred to its policy that prohibits “products that promote or glorify hatred, violence, racial, sexual, or religious intolerance or promote organizations with such views.”

Several retailers appear to have sold the shirt, or similar apparel with the same slogan, including Byronz Clothing and Styleart. The former has since been taken off Amazon completely, while the latter seller features products such as a Duck Dynasty slogan mug, and a T-shirt of a woman bleeding from her nose and mouth above the word “cocaine.”

While the apparel is still visible from cached searches of the T-shirt slogan, it seems the most prominent places still peddling the apparel, or at least shirts with the same slogan, are sites “T-Shirt Hell” and “NSFW T-Shirts.” Hell, indeed, is where they rightfully belong.