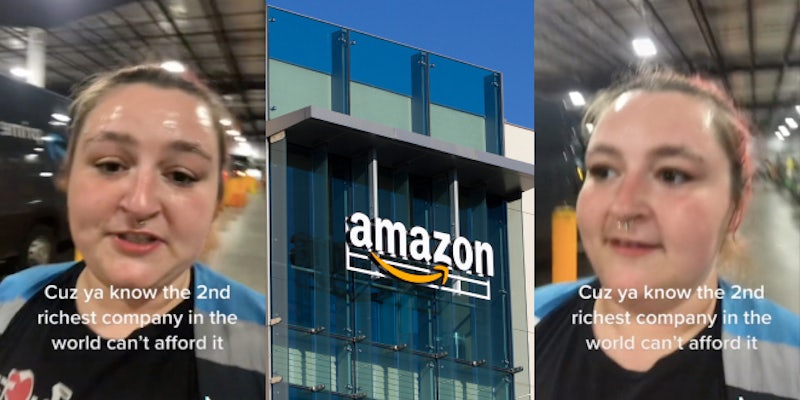 ‘Y’all be expecting the most’: Amazon worker says company will no longer provide water for delivery drivers, sparking debate

The Amazon employee claims the company is still providing water to its warehouse workers.

An Amazon driver went viral on TikTok after claiming that their employer will stop providing bottles of water for drivers.

In the clip, Jordan Johnson (@endingracismstartswithus) films herself walking through the Amazon warehouse. Beads of sweat coat her forehead while she tells her followers that Amazon will allegedly stop giving their drivers water bottles.

“So when you see your driver delivering at 200 doors a day, make sure you give us a bottle of water,” Johnson says in the clip.

She further explained the alleged reasoning behind management’s decision in the text overlay, “cuz ya know the 2nd richest company in the world can’t afford it.”

According to Inquirer.net, Amazon ranks as the fifth richest company in the world, based on its market capitalization in May 2022. While it may not take second place, Amazon generated over $121 billion in revenue in Q2, a growth of 7%, per CNBC.

Johnson’s video racked up over 456,000 views as of Monday, with many viewers criticizing the TikToker for her complaint.

“or like the rest of the world bring your own water,” one viewer wrote.

“The ‘make sure’ don’t sit right with me no one brings me water or lunch while I’m at work,” a second said.

“Lmao y’all be expecting the most theese days,” a third stated.

Johnson posted a follow-up video in response to the comment, confused as to how she was “expecting the most” out of her job.

“Expecting the most? Let’s get into it,” Johnson says at the beginning of her video. She then compares Amazon delivery drivers’ pay to that of drivers for UPS.

Johnson claims Amazon drivers are paid an average of $17.50 an hour and expected to complete between 200-250 stops a day. While wages vary based on state, Amazon increased its average starting wage to $18 in September 2021, per Reuters.

On the other hand, UPS starts off at $27 and after four years, the pay is bumped to $40 an hour for doing the same job. According to a UPS spokesperson, the average salary for a full-time UPS delivery driver is about $95,000, before benefits.

Many of the benefits of UPS jobs are due to its workers’ affiliation with the International Brotherhood of Teamsters, a longtime union organization. However, the Teamsters launched an Amazon division this month, in hopes of extending these benefits to Amazon delivery drivers as well.

“The Teamsters Union is home to 1.2 million workers, including 340,000 UPS employees, most of whom perform the same roles as Amazon workers,” a Teamsters press release reads. “The wages, benefits, and retirement security of UPS Teamsters are protected by the union’s national master agreement, the single largest union contract in the world.”

She further responded to critical viewers in the follow-up video’s caption.

“We can do this all day,” Johnson wrote. “If y’all think Amazon sweet why do we have the high turn over rates. Most people don’t even stay past 2 weeks.”

It’s no surprise that Amazon workers are quitting in droves. Many are fed up with the working conditions, demanding higher pay and better treatment, and attempting to unionize. The corporate giant has a staggering 159% employee turnover rate, increasing by 36% since 2019, according to Vox.

Several viewers defended Johnson in the comments of her initial video, however.

“I think a lot of y’all are missing the point,” one user wrote.

“Everyone saying get your own missing the point lol,” another added.

“Comment section did not Pass the vibe check,” a third viewer claimed.

The Daily Dot reached out to Johnson via TikTok comment, as while as to both Amazon and the Teamsters Union via email.