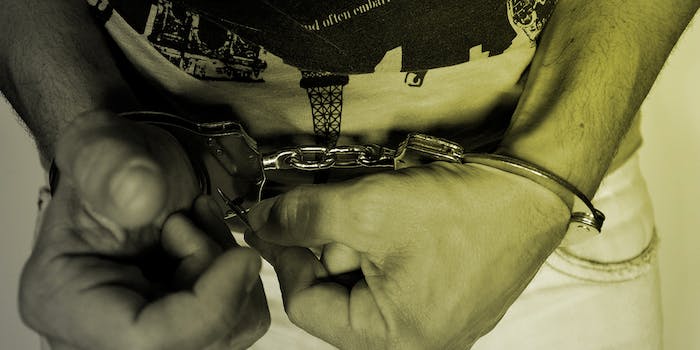 'The reason i did it is because of what that officer did to alton sterling.'

A hacker named @0x2Taylor claimed responsibility for accessing the database on Thursday afternoon. It is unclear whether Taylor accessed the data himself or was given it by a third-party and took credit.

The database was confirmed as legitimate by Jamie-Luke Woodruff, a security intelligence analyst who works at Patch Penguin, a British cybersecurity firm. Woodruff, who communicated with Taylor by phone to further confirm the hacker’s claims, told the Daily Dot in a private Facebook chat that the administrators of the website had failed to implement proper security measures.

The “breach”—for lack of a better term—appears to have simply been a case of unauthorized access through the use of discovered login credentials rather than through any kind of technical attack.

“The website had its permissions set wrong and shouldn’t have been left open for the public to see this data,” Woodruff explained. “They seem to have obtained credentials to the Oracle server in which they extracted the database information. But they didn’t set out to get the data that they obtained it was just random that the credentials was found.”

Eric Romero, who runs Information Services for Baton Rouge, said he heard “rumors of a breach” but was unable to confirm it had occurred.

“I  have heard some rumors of a breach,” Romero told the Daily Dot in a phone conversation. “But we have not been able to confirm.”

Baton Rouge police officers shot Alton Sterling, 37, after a confrontation in front of a convenience store in response to reports of an armed man.

Multiple videos of the shooting, captured on cellphone videos by bystanders and released online, call into question some officer claims that Sterling, who has faced multiple criminal prosecutions in the past, was holding a gun when he was shot. Footage published on Wednesday shows Sterling’s hands seemingly empty when he was shot in the chest and back. Although Sterling was still breathing at the end of the video, he died before an ambulance arrived.

When Taylor first announced the hack, he accompanied the tweet with three hashtags revealing the motivation behind the action: #AltonSterling, #Hacked, and #BlackLivesMatters.

“The reason i did it is because of what that officer did to alton sterling,” Taylor told the Daily Dot in a private Twitter message. “i’m sick of seeing police abuse their power and all the killings.”

Update 3:59pm CT, July 7: Added additional details about the nature of the “breach,” which appears to have been more a case of unauthorized access rather than a technical attack.