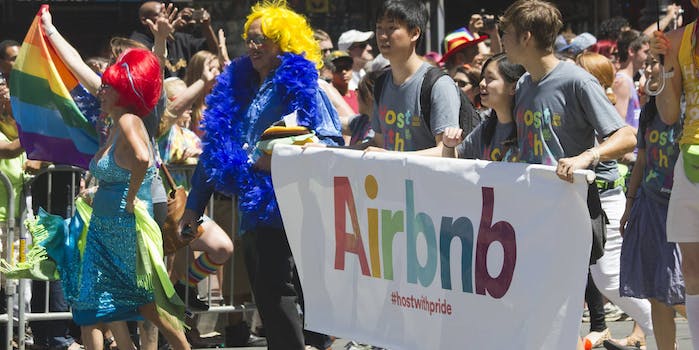 'A lot of LGBT people disclose ahead of time because there's so much discrimination.'

When television writer and producer Shadi Petosky was refused a room offered through the home-sharing platform Airbnb last year, she didn’t go to the press.

“I’ve definitely had hosts not respond to me before,” Petosky, a transgender woman, told the Daily Dot on Monday. “But this was the only time I knew why—the only time it was overt.”

In a message, the Airbnb host had told Petosky that she couldn’t stay because the host thought Petosky’s trans status might make her 13-year-old son uncomfortable.

Like many LGBT travelers, Petosky had chosen to disclose ahead of time that she was transgender in order to avoid any unexpected conflicts.

“I don’t want an incident to happen when I arrive. I don’t want a scene there,” Petosky told the Daily Dot. “A lot of LGBT people disclose ahead of time because there’s so much discrimination. We’re often kind of accused of tricking or trapping people.”

At the time of the incident, Petosky said, she reported it to Airbnb with no result.

“They asked for the name of the user, so I sent that. Then nothing happened; it was just dead air,” Petosky said, noting that some time after she reported the host for discrimination, they were awarded “superhost” status on the platform.

On Monday, Airbnb told the Daily Dot in a statement that the host was finally being removed.

“Discrimination has no place in the Airbnb community,” said Airbnb spokesperson Nick Papas in an email. “We are removing this host from Airbnb.”

The reason Petosky chose to tweet about the incident a year after the fact is simple. Airbnb has recently come under fire for incidents of racial discrimination that inspired the hashtag #AirbnbWhileBlack.

On June 1, the company banned a host who sent derogatory messages to venture capital firm associate Shani Taylor after she tried to book lodgings.

My friend and classmate here at Kellogg had a hateful and racist encounter with an @Airbnb host. pic.twitter.com/rFHlwqy5sQ

After Taylor’s screengrab of the racist message was retweeted more than 2,000 times, similar stories poured in from Airbnb users who said they’d been denied rooms for no reason and even experimented with making fake white profiles to test whether hosts were denying them due to race.

The letter which sounds like they google'd Me & decided B/c of how I make My living I don't deserve a place to stay pic.twitter.com/kGqeArWqDg

In a memo shared with the Daily Dot on Monday, Airbnb announced that it had hired former Laura Murphy, former head of the ACLU’s Washington Legislative Office, to lead a series of anti-discrimination efforts.

“To learn more about what Airbnb can do,” reads the June 2 memo, “we are undergoing a comprehensive review

be done to make sure the platform can help make sure everyone is treated fairly.”

The company expects the internal review to be completed in September and in the meantime says that “unconscious bias” training will be offered to its team members and some hosts.

Airbnb’s current anti-discrimination policy, posted on its website, states that discriminatory language is prohibited on the platform—but it also states that users need only comply with local discrimination laws. In many countries, those laws do not exist, especially when it comes to LGBT users.

In September 2015, Petosky livetweeted a humiliating airport incident with the Transportation Security Administration that caused her to miss her flight—all, Petosky said, because her gender status triggered some sort of alarm.

As the Airbnb story picked up steam on Monday, Petosky joked on Twitter that she had become an “accidental transsexual travel activist.”