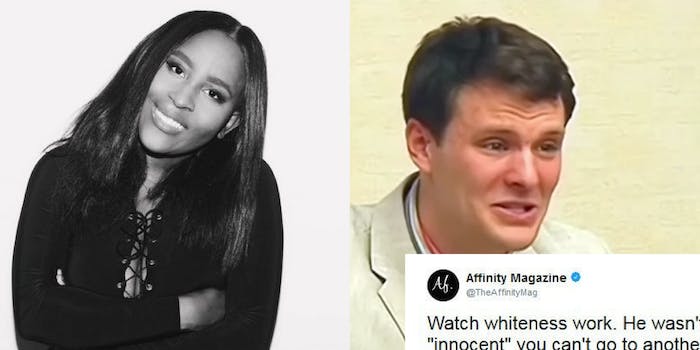 This is what happens when you conflate racial bias, victim blaming, and the mistreatment of Otto Warmbier.

For internet pundits, divisive opinions are the ultimate currency. Be it arguing that an obsession with male rompers could actually be sexist, or that the recent Bachelor in Paradise scandal could co-opt reality television as a vehicle used to explore sexual assault, the more nuanced the angle and the greater the risk, the greater the retweets.

But what hot takes and those attracted to writing them often don’t grasp, or perhaps care to grasp, is that there are boundaries. Like maybe don’t use the tragic death of 22-year-old University of Virginia student Otto Warmbier, who had been imprisoned in North Korea for over a year, to chime in about privilege and race.

Affinity Magazine, a “by teens, for teens, always controversial” social justice site launched in 2013, had the wrong tweet about the tragic story—and founder and Editor-in-Chief Evelyn V. Woodsen, a 20-year-old from Baltimore, is now trying to walk back from the burn. Sort of.

When Washington Post columnist Josh Rogin on Monday tweeted an interview with Warmbier’s roommate from his trip to North Korea, Woodsen chimed in.

“Otto Warmbier was an innocent kid tortured by an evil regime. Read my interview with his North Korea roommate here,” Rogin wrote, prefacing a link to the story.

Woodsen, however, believed Warmbier wasn’t a “kid,” nor was he “innocent,” having been detained as an adult for the alleged anti-state offense. So through the Twitter account for her publication—which employs more than 400 writers (though only half are active, as teens have other commitments) and averages 500,000 page views per month—Woodsen struck back, writing: “Watch whiteness work. He wasn’t a ‘kid’ or ‘innocent’ you can’t go to another country and try to steal from them. Respect their laws.”

Woodsen’s opinion prompted backlash and outrage across social media. However, she insists her messages were not a show of support for North Korea, and were intended to provide context on other social justice issues.

In a second tweet, Woodsen refuted the idea that Warmbier’s death was justified, but wrote, “…the punishment was harsh, but also you have to respect the laws in other countries.”

Of course not, the punishment was harsh but also you have to respect the laws in other countries

Woodsen’s message was criticized throughout the next day by Twitter users who took issue with her attempt to further politicize the death of Warmbier and were stunned by what appeared to be support for North Korea’s authoritative regime. She ultimately deleted the first tweet.

A GoFundMe to send the teens at @TheAffinityMag on a fact-finding trip to North Korea.

Woodsen denies that any part of her message was meant to show support for North Korea, nor its treatment of Warmbier while he was imprisoned.

“We do not in anyway condone North Korea’s human rights violations or the way they callously treated Otto. Condolences to his family,” Woodsen told the Daily Dot via Twitter. “This tweet was very insensitive and the timing was very off.”

Instead, Woodsen said the tweet was meant as a critique on how we frame young Americans in the media.

“The tweet was a response to someone saying [Warmbier] was a child and innocent—immediately I thought of all the black children like Tamir Rice who weren’t extended the same veil of being seen as a child. Tamir was only 13, and Otto is 22,” Woodsen said.

“What people don’t understand is being black in America means you always have to be cautious of your every move. Black kids are taught early don’t do anything that might get you in trouble. I wish I could have expressed that in 140 characters but I couldn’t… I just wish that people are more outraged by black people getting killed in their own country.”

Woodsen published several other tweets related to North Korea, though not necessarily to the death of Warmbier, which she’s kept online.

This literally never happens in the media. They label black children as grown men. https://t.co/ngH8qQGdUC

In North Korea, that's their law. It's not America

Hmm.. Wait until you find out what American police kill people for https://t.co/yKdNmxWgNy

Woodsen has a point about the double standard afforded to white men. But the context in which she made her argument made little sense: North Korea’s mistreatment of Warmbier and the United States’ treatment of black people aren’t mutually exclusive, after all. It’s a common social media foul, fusing two (unrelated) trending stories into one false equivalence.

Woodsen effectively managed to co-opt Warmbier’s story to promote a different political discourse. She refuted another person’s reality to make a point about her own.

Woodsen didn’t intend to support the systems that led to Warmbier’s death, but her assertion that he should have “respected the laws” of the country remains baffling.

It’s an argument often used against refugees and undocumented immigrants seeking solace or a better life in the U.S. For a publication focused on social justice, it made more sense for Affinity Magazine to question the parameters that landed Warmbier in prison. (The magazine has previously questioned the U.S. immigration system for being difficult to navigate.)

She called her publication “unfiltered media,” because she said it isn’t tethered to a parent corporation or advertisers (Woodsen said teen contributors have been able to leverage unpaid experience into opportunities with VICE, Teen Vogue, ABC, and more). As an independent news source, she said she feels a duty to the “overlooked” sides of a story.

“I’ve been to a number of Asian countries and I always encounter foreigners treating the countries as a dumping ground and just running wild, it’s truly disheartening. I think it makes sense, many people don’t know what’s happening in the world. Especially our teen readers, I think it’s important to highlight those issues with Affinity,” Woodsen said.

Despite being given the chance to rethink her assertion that Warmbier should have followed the rules, mimicking similar arguments made about victims of police brutality—that they should have acted differently to avoid being assaulted by police—Woodsen, like most internet dissenters, did not back down. She instead conflated speaking out against racial bias with putting the onus on the victim.

“I think this all relates to police brutality in America. The same way people say, ‘Hey, he should have put his hands up,’ is the same way people are saying Otto should have followed the laws. I personally think all of this discourse surrounding Otto is hypocritical. I just wish more people paid attention to the same violations happening in their country. The same way Otto was killed over a flag, Trayvon [Martin] was killed over an Arizona [tea] and Skittles. I believe the fact that I am a person of color really shapes my perspective differently, but it isn’t with malice, just misunderstanding,” Woodsen said.

Affinity wasn’t the only publication called out for similar arguments made in light of Warmbier’s death—Salon, HuffPost, Bustle, and other outlets have been criticized for articles published in 2016 after the student’s arrest, their posts pointing to Warmbier’s perceived naivety, rooted in upper-class privilege.

But during our exchange, Woodsen seemed to grasp at straws. By invoking ongoing societal perils, she tried to bolster the context of her doomed tweets.

She also asserted that it was Twitter’s architecture of 140-character thoughts—the medium is always the dissenter’s friend until it isn’t—that prevented her from fully explaining how police brutality and white privilege related to Warmbier’s death. She said she deleted the tweets she did because she felt it was the right thing to do.

In the meantime, Twitter continues to do what it does best: Call out Affinity’s insensitive logic until another more controversial take comes along.