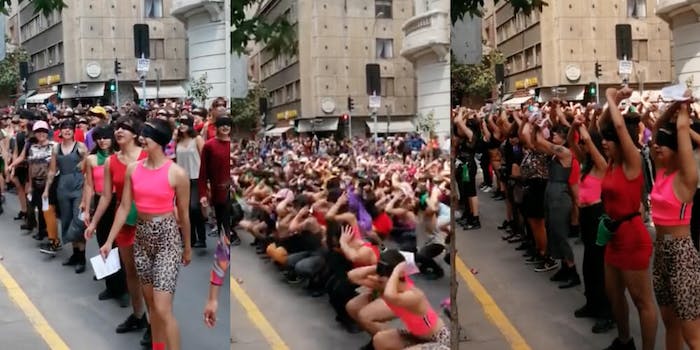 The protesters broke out in a choreographed chant and dance.

As part of the ongoing protests in Chile, female activists flooded the streets to protest violence against women on Monday.

The protests were held outside the Ministry for Women’s Rights and Gender Equality, in conjugation with International Day for the Elimination of Violence against Women.

Organized by the feminist collective Lastesis, their chant called out both “macho” (toxic masculinity), the government, and judicial systems’ failure to protect women.

“The intention of the Chilean security forces is clear: to injure demonstrators in order to discourage protest, even to the extent of using torture and sexual violence against protesters. Instead of taking measures to curb the very grave human rights crisis, the authorities, under the command of President Sebastián Piñera, have pursued a policy of punishment for over a month, adding yet more people to the staggering number of victims, which is continuing to rise to this day,” Erika Guevara-Rosas, a director at Amnesty International, said in a news release.

Translated by a Spanish speaker for the Daily Dot, the chant reads in English as the following;

Patriarchy is a judge

Which judges us for being born

Is the violence you see

Impunity for my killer

And the blame wasn’t mine

Or where I was

They are, the cops

The opresive state is a rapist macho (2)

Without worrying for bandits

Because for your dreams sweet and smiling

The lines, “Sleep well innocent girl. Without worrying for bandits. Because for your dreams sweet and smiling your lover ‘carabinero’ watches” is taken directly from the Chilean police anthem.

The Chilean protests of 2019 began in October. They began as a protest against a metro fare hike. The protests snowballed into an overall protest against government corruption and inequality.

At least 26 people have died and thousands more injured.

Both Amnesty International and Humans Rights Watch, which met with Chilean President Sebastián Piñera on Nov. 26, are urging the Chilean government to address the abuse allegations.

“(Humans Rights Watch) recommended a series of reforms directed to help prevent police misconduct and strengthen oversight in the wake of compelling evidence of excessive use of force and abuses against demonstrators and bystanders,” the organization wrote on its website.