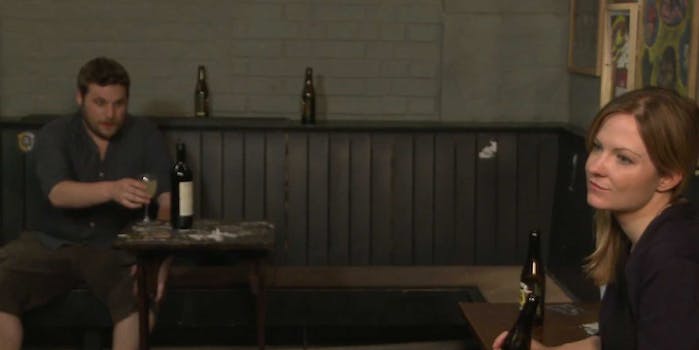 These awkward online dating conversations are even worse IRL

"Oof" is the only appropriate word here.

Websites like OkCupid have undeniably changed the nature of flirtation, but do we have any idea how much? A new video has given us a clue by transplanting a series of real online chats to an actual bar—reaffirming, in the process, how stupid and mean we tend to sound on the Internet.

“The following are all genuine conversations that have been had on online dating sites,” reads an explanation at the outset. Then we delve into the cringe-worthy encounters themselves, in which at least one party is always unresponsive, unwilling to take a hint, or shockingly abusive when things don’t go as planned.

At other times, the exchanges are just plain cold-blooded. Can you imagine saying “thanks for the message, but you’re not what I’m looking for” to someone’s face? The Web, as ever, allows for weirdly detached honesty, scrubbing our remarks of tact and nuance.

And while the chats themselves are glorious, painful disasters, it’s the actors that really sell the bit, making the creepy and clueless lines alike sound all too earnest. If this is an accurate representation of casual online dating, I’m all the happier to be married.