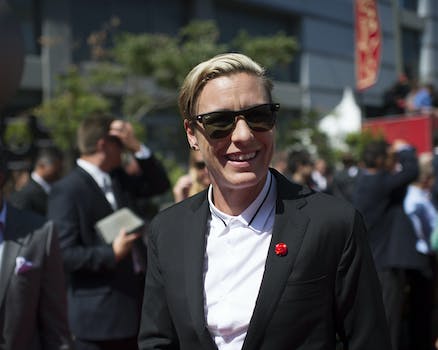 A love letter from a lesbian fan.

I mean, she’s going to anyway. The soccer forward who scored more goals than any other player of all time—male or female, across the world—announced yesterday that she is packing up her professional soccer career.

But most importantly: where does this retirement leave us, her rabidly obsessed lesbian fans? What are we supposed to do with our lives if we can’t don our Wambach 20 jerseys, stroll down to the local dyke bar (just kidding, we all know those don’t exist anymore), and chant her name over and over while drunkedly slobbering lame jokes about what a “header” really means?

Dammit, Abby. You’ve spent the past 15 years torturing us with your cute smirk and tall, muscular frame; your impeccable and unbeatable game; your nervous stammer in interviews; and your celebrated coming out. Not to mention your massive 2015 World Cup win that led to the first New York City ticker tape parade for a women’s professional sports team, an ESPY award for team of the year, a Sports Illustrated cover, and a summer of total media domination.

The lesbian community’s crush on you, Abby, is no joke. Yes, we still write fan fiction about other USWNT players. But you know very well that it’s not every day that we get a hero of your status—an out Olympian, a super-dyke with the strength to topple hundreds of international soccer teams and the humility to always give a shout-out to your teammates before taking any credit for yourself. You stood up for all women athletes when you protested second-rate treatment like that crappy Astroturf and the fact that your team was paid 40 times less than the losing men’s team.

But most of all, you’re so darn cute.

If you really have to leave us with a Wambachless women’s soccer industry, we hope you’ll at least consider publishing an annual pinup calendar. You’ve kept us swooning for this long and to be honest, we can’t even fathom a suitable replacement.

In the meantime, let’s take a little stroll down memory lane with the top 10 moments in Wambach lesbian-fandom history.