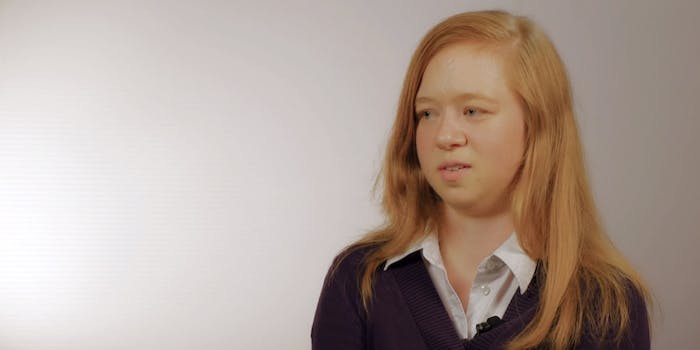 Screengrab via Project on Fair Representation/YouTube

Reminder: Even white students can benefit from affirmative action

As SCOTUS rejected an anti-affirmative action case today, a reminder that the initiative isn't just about race.

On Thursday, the court issued its final decision in the case of Fisher v. University of Texas at Austin—deciding in favor of the school and against plaintiff Abigail Fisher’s 2008 accusation that unfair affirmative action policies prevented her from being accepted to the college.

Kennedy’s affirmative decision in favor of the University of Texas was a clear message of support for school diversity initiatives.

A university is in large part defined by those intangible “qualities which are incapable of objective measurement but which make for greatness.” Sweatt v. Painter, 339 U. S. 629, 634 (1950). Considerable deference is owed to a university in defining those intangible characteristics, like student body diversity, that are central to its identity and educational mission.

Justice Samuel Alito, one of only two remaining conservatives (plus one “swing” voter) on the court, offered a dissenting view that was backed by Justice Clarence Thomas and Chief Justice John Roberts. The dissenting view focused largely on the fact that the university had not been able to quantify in detail the exact role that an applicant’s race had in admissions.

The University has still not identified with any degree of specificity the interests that its use of race and ethnicity is supposed to serve. Its primary argument is that merely invoking “the educational benefits of diversity” is sufficient and that it need not identify any metric that would allow a court to determine whether its plan is needed to serve, or is actually serving, those interests.

Fisher’s case—and complaints in general about affirmative action—inspired waves of mockery online, with hashtags like #StayMadAbby and #BeckyWithTheBadGrades trending on Thursday. Many on social media pointed to racism as a motivating factor for Fisher’s lawsuit—because indeed, race was the single diversity consideration she felt had prevented her from being accepted to UT.

But to say that race is the only diversity factor considered in college admissions processes isn’t just incorrect, it’s ignorant.

What Fisher’s case leaves out—and what Justice Kennedy’s affirmative decision touches on—is the fact that race is just one of many factors considered by colleges and universities seeking to expand their student bodies from traditionally exclusive privileged classes into bodies that are more representative of the general population.

Like many top universities, the University of Texas employs a complex rating system when evaluating candidates for admission. This includes something called the PAI, or “Personal Achievement Index.” According to the Supreme Court decision, the Texas PAI is a numerical score made up of essays, supplemental application materials like letters of recommendation, and an overview of a student’s “special characteristics” that essentially offer a look into character, background, and obstacles overcome.

Texas PAI includes a total of seven special diversity considerations, of which race is only one.

Here’s how diversity considerations like the ones at University of Texas actually benefit, not exclude, white students. For a white student with slightly lower SAT scores or grade average, for example, consideration of their family’s poverty-level income or their standout grades at a school with terrible overall averages could throw an admissions decision in their favor. Similarly, a white student living in a home filled with non-English-speaking Polish or Russian immigrants would receive a checkmark there as well, ostensibly for overcoming the barrier of schooling in a new country and language.

In other words, all students can benefit directly from affirmative action as recipients, regardless of race.

Full disclosure: I am a white, Irish Catholic woman who reaped the benefits of affirmative action and diversity mandates that are sweeping U.S. schools. In 2009, I applied to several four-year colleges as a transfer student from a community college. Despite being white, I fit neatly into a compendium of diversity checkboxes: I was a high school dropout returning to school after over a decade. I was the child of a single mom who did not graduate high school, who also grew up poor with a mom that had no schooling. I had no money whatsoever. I had been on welfare and food stamps. I was an out lesbian.

I’ll never know exactly which of those “special characteristics” helped lead to my admissions in addition to good grades, but I was offered full-ride scholarships to more than one university. At least one of those schools, Stanford, offers free tuition to any accepted student whose income falls below $125,000 annually. The college I decided to attend, Reed, also offered a full scholarship package—comprised in part of smaller scholarships aimed at older returning students as well as a commitment to meeting the demonstrated financial need of all accepted students.

So why didn’t Fisher complain about class, about language, or about parental education levels when she decided to battle the University of Texas? That is unclear.

What is clear is that the country’s most elite colleges have increasingly begun to set aside more slots for poor and first-generation students. According to the website Firstgenerationstudent.com, dozens of top schools now give extra consideration—all other factors, like scores, being equal—to students from non-traditional class backgrounds.

Duke, Stanford, Brown, Vassar, Williams, Yale, Dartmouth, Cornell, and other schools have all either pledged to meet 100 percent of demonstrated financial need or have income cutoffs (usually between $60-75,000) where no tuition is charged for families who fall below the dollar mark.

Like race, income is merely one of what Justice Kennedy called “a factor within a factor within a factor.” But in order for an honest defense of affirmative action to take place, an honest assessment of the selection process is necessary. And for Abigail Fisher, the varied spectrum of identifiers that comprise today’s college admissions diversity initiatives make her allegations of racism a moot point.