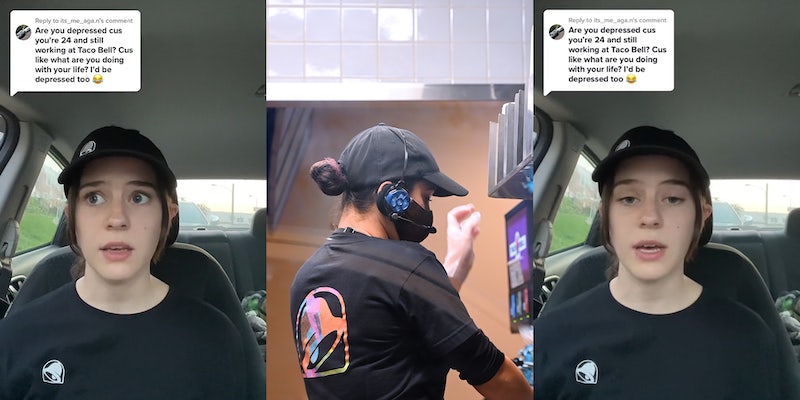 ‘I enjoy my job. I like it’: 24-year-old Taco Bell worker called out for being too old, sparking debate

'What are you doing with your life?'

A young Taco Bell worker called out a person in the comments section who insulted them for being 24 years old and working at Taco Bell.

User Tara (@indicababe) posted a video replying to a comment from a previous video. The clip features Tara in her car, wearing her Taco Bell uniform. The comment can be seen in the top left corner, reading, “are you depressed cus you’re 24 and still working at Taco Bell? Cus like what are you doing with your life? I’d be depressed too.”

Tara starts off the video by asking, “Where am I supposed to be working as a 24-year-old? Is there a specific job 24-year-olds go to? Because I never heard of it.”

She further explains how she loves her job at Taco Bell despite only working there for a week. Tara thinks it’s a really nice job because “there’s not much I have to do, the hours are nice, my co-workers are cool.” Tara shifts the conversation back to the comment, stating it’s none of the person’s business and doesn’t understand why the person felt thought it was funny to leave a rude comment. The video wraps up with her mocking the comment and sharing how she gets free Taco Bell for working there.

The video racked up over 118,000 views with the viewers defending Tara, stating a “job is a job.”

“People just can’t understand that a job is a job. Don’t matter if you work at McDonalds, dishwasher, whatever. You making that money is the point,” one person stated.

“Income is income, who cares what it is. Like you said you like your coworkers, you have fun and you get free Taco Bell! Sounds like all wins to me!” a third commented.

In addition, people shared how everyone’s job path is different than others.

“I had a college degree and was working at Panera Bread at 28 years old. Now I’m working in my career at 30. Don’t ever look down on someone WORKING,” one person shared.

“There is no correct life track. Didn’t graduate college until I was 30. And it doesn’t matter, nothing matters. Do you,”  a second commented.

“I’ve worked retail 20yrs. I’ve seen people with masters degree working retail FT because they can’t get the job they went to school for. Life happens,” a third said.

“Some people think you’re supposed to be CEO, millionaire, etc. I just started using my degree. Life’s not a race. Everyone has different pace,” a fourth wrote.

Tara thanked people for their support by writing in the comments, “Thank you trying my best and getting my life together. I’ll get to where I want to be in time. For now Taco Bell is nice.”

In the TikTok video, the person who left the comment was Tara sharing a story that happened at work. Tara recounted the story, where a customer wanted to speak with her manager because she claimed “someone in the parking lot had a dead child in their backseat,” come to find out, the car was Tara’s. The person was from DoorDash, who parked next to Tara’s car, and looked over at it. The “dead child” was a glass doll Tara forget to take out. The camera briefly shifted to reveal the glass doll from the DoorDash driver’s perspective and she said that he was about to call 911.

It’s a busy month for Taco Bell with the return of the Mexican Pizza and so videos from workers have been particularly prominent on the TikTok For You Page.