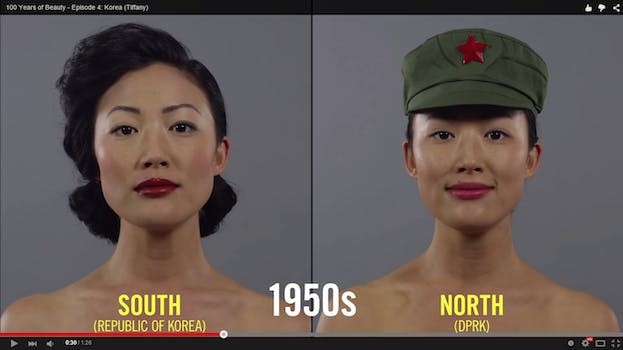 It's a fascinating look at how North and South Korean fashions have changed over the past 100 years.

Cut Video’s latest “100 Years of Beauty” video puts North and South Korean fashions side by side, exploring how beauty standards changed after the country split in two.

The previous “100 years” videos were interesting enough, but we basically already knew what American fashions looked like throughout the 20th century. This comparison between North and South Korean beauty standards is a lot more enlightening, especially when you think about the main source of fashion trends in North Korea: political propaganda.

Even more interesting is the behind-the-scenes video from researcher Robin Park, who explains the history behind some of the North and South Korean looks. Korean fashions were heavily influenced by Japanese colonialism during the first half of the 20th century, but later trends diverged because of differing tastes under communism and capitalism.