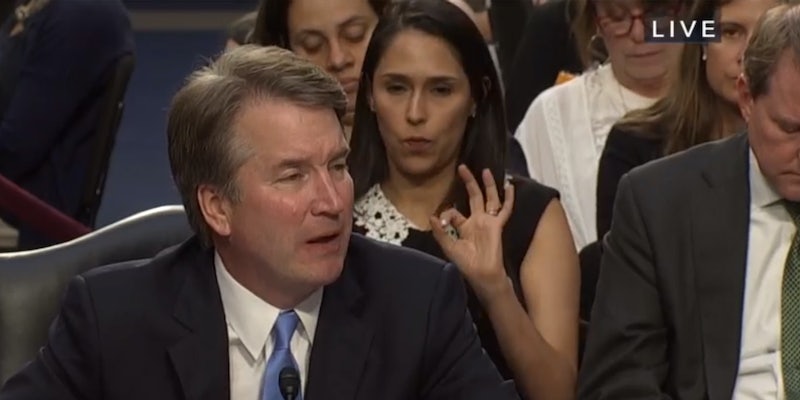 Zina Bash is again under fire for ‘OK’ hand sign

On Tuesday, Zina Bash, a member of Supreme Court nominee Brett Kavanaugh‘s team, came under fire for holding her thumb and forefinger together in a circle.

A gesture that was once universally understood to mean “OK,” has been reappropriated by pranksters as a nod to white supremacy and the policies of President Donald Trump.

But it also still means “OK,” so when Bash flashed it, it spawned a deluge of opinions on what. it. all. means. The general conclusion was that she probably wasn’t being racist. Her team downplayed it publicly this week as a meaningless gesture. But as Kavanaugh’s hearings continued, she… did it again late Thursday.

Omg. She did it again pic.twitter.com/ELL4S5vqJb

Speculation immediately erupted online. Was it a troll? A wink and nod? A wink and nod about a wink and nod? Or just a momentary lapse where she forgot about the online fracas from earlier in the week and was signifying “OK” and not “OK, let’s kill the Jews.”

get this woman a trophy for greatest troll of all time https://t.co/IEVuJ4Rptw

This was better than any middle finger she could have given. https://t.co/0mDtTrOLwu

There are no Kavanaugh hearings scheduled for Friday, so at least she won’t have the opportunity to drive the internet up the wall again.