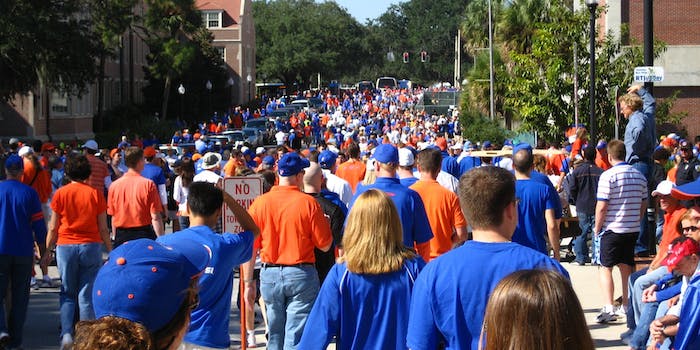 How one university wants to use Yik Yak for good

It could be a new way for students to get information from colleges. Of course, it also has a dark side.

Yik Yak is home to gossip and commiseration about professors and Greek life, but soon it will also feature an official stream of news on the University of Florida campus. The university is using a Yik Yak channel to bring hyperlocal news to the students on campus based on their location.

Called “Swamp Juice,” the official feed of the university will feature news stories from journalism students. It will only be available in a one-and-a-half mile radius around the university, so students can only see the 200-word updates when they’re near school.

“It’s really the first time that someone’s really tried to produce an ongoing stream of local information,” director of entrepreneurship and partnerships at the University of Florida College of Journalism and Communications, Randy Bennett, told industry publication Journalism.co.uk. “So we’re learning what people are doing and how they’ll react to it.”

Yik Yak is among the growing number of anonymous applications that have come under fire for hosting malicious content and enabling harassment and cyberbullying. So much so, the app banned itself at high schools across the country. It’s now particularly popular among college students as the social network displays content from small geographic areas, making it a perfect companion app for people to communicate in location-based communities. Of course, because Yik Yak is home to an abundance of messages like those below, this partnership comes with its challenges.

By implementing an official university news channel on Yik Yak, the University of Florida could be the first major institution to take advantage of a burgeoning social network. Much the same way a campus Twitter feed provides news and updates to its connected students, Yik Yak is another tool to make sure people are educated about what’s going on in the community.

It’s an interesting shift from the usual ways people are using the application. And if it takes off among students in Florida, it’s likely other schools will adopt Yik Yak as way to communicate with students heads down in their smartphones.