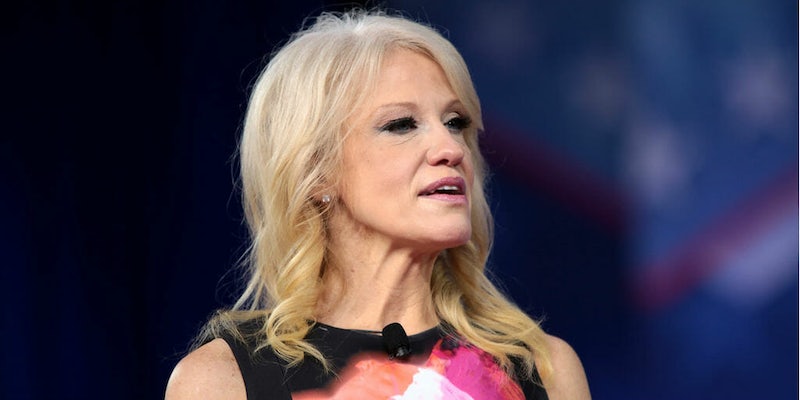 Reporter to Kellyanne Conway: ‘When they say democracy dies in darkness, you’re the darkness’

Conway came back with her own retort.

White House adviser Kellyanne Conway sat down for an interview with journalist Michael Wolff at The President and the Press event in Washington, D.C., on Wednesday, where she criticized the media’s coverage of her boss, President Donald Trump. But it wasn’t long before the tables turned.

Conway shrugged off the accusation: “Look, I’m not elected to anything… there is something that I call presumptive negativity. And you can look at something and see it as a positive or as a negative. And for this president, it’s often seen through the negative lens, which is not just unfair, it’s actually inaccurate, and it denies and robs the larger viewership/readership/American people of the opportunity to hear what’s really happening.”

Some have taken to Twitter to call the accusation well-deserved.

Kellyanne Conway says she's "not the darkness." Oh, Kellyanne. The darkness doesn't know it's darkness; it just is. #TrumpandthePress

Kellyane says that saying "democracy dies in darkness" doesn't make it true. Does this mean she believes democracy thrives in darkness?

Kellyanne is a symptom; Donald Trump is the disease.

Others, in support of Trump, said that the media—not political operatives—is the darkness.