Want to keep using Windows 7 or 8? Microsoft has other ideas.

Microsoft hasn’t been subtle about letting users know it wants them to upgrade to Windows 10. From pushing the new OS via automatic update, to making sure the pop-up telling you to upgrade has no clear opt out button, Windows is playing hardball. But their latest move, which is akin to a malware trick, has internet users livid.

You may have noticed in the last week friends online posting about their computers automatically updating to Windows 10 even though they’d opted out. Here’s what the original opt out screen looked like.

On a Windows 8.1 PC. Mostly full screen pop-up. No clear "No thanks" button, just download Windows 10 now or later. pic.twitter.com/RRoaFMST9r

While it was obnoxious, users could still opt out by clicking the “x”. It isn’t immediately clear by looking at the screen, but users were able to figure it out. Apparently too many people were finding it easy to bypass the alert, because Microsoft has changed the box again, only now clicking “x” to the close window now counts as accepting the update.

Users have come to expect that closing out a window is a way of saying no. Now Microsoft has decided, without giving users any warning, that no means yes. Here’s the new window. 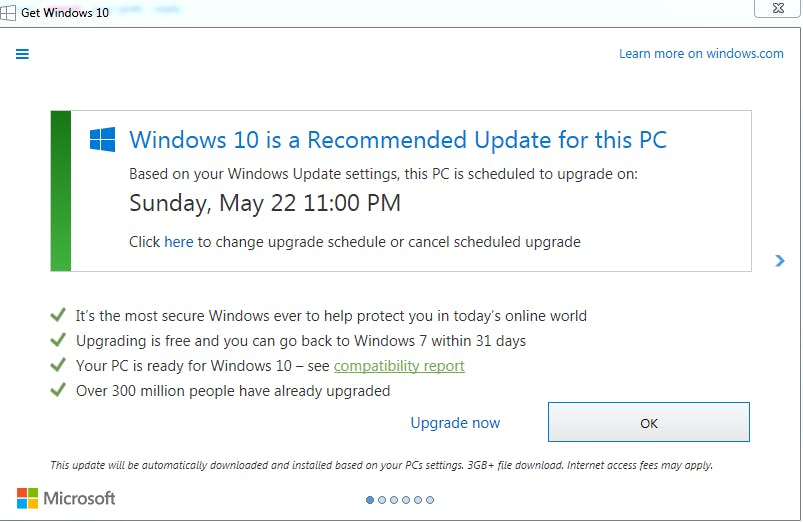 The only way to cancel the upgrade now is to click on the “Click here to change upgrade schedule or cancel scheduled upgrade” option. For many not-so-savvy users this is needlessly confusing at best and intentionally deceiving at worst.

There are currently only two options for avoiding Microsoft’s strong arm tactics for getting you to upgrade. One is to turn off automatic updates, which leaves your computer vulnerable unless you make a point of manually updating against new threats. The other is Never 10, which allows you to remove and disable the upgrade window quickly and easily.

Yes, it’s an onerous step to force users to take to keep the operating system of their choice. Regardless of your feelings on Windows 10, this is undeniably a strong arm tactic that resorts to tricking users into downloading an operating system.

If your computer has updated to Windows 10 against your wishes there is good news: Microsoft has included a fix for most users. Just go to the Start menu, then click Settings > Update & Security > Recovery. There you will find an option to downgrade back to Windows 7 or 8. While it is nice this feature was included it’s sad that it need to be.

Hopefully, Microsoft will fix this intentionally confusing update prompt. Until then, be careful and remember no doesn’t always mean no with Microsoft. Malware gets downloaded against your will, but a new version of Windows shouldn’t act the same way.