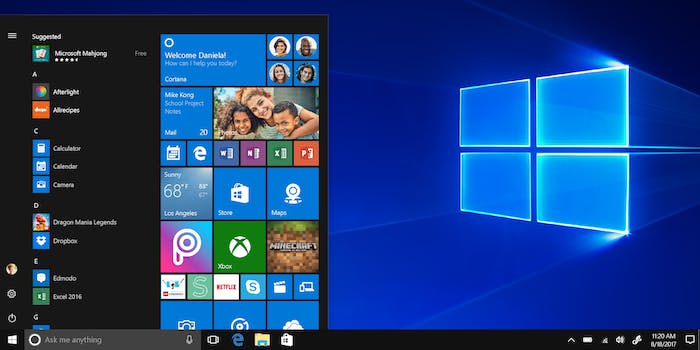 The yet-to-be-named update should officially ship by May.

Microsoft’s latest Windows 10 update was reportedly supposed to arrive last week, but last-minute problems have pushed the release back. According to the Verge, a “blocking bug” has pushed back the release of the update.

“As Build 17133 progressed through the rings, we discovered some reliability issues we wanted to fix,” Microsoft’s Dona Sarkar wrote in a Windows blog post. “In certain cases, these reliability issues could have led to a higher percentage of (BSOD) on PCs for example.”

BSOD, for the unfamiliar, is the acronym for Microsoft’s infamous “Blue Screen of Death,” a full-screen error indicative of a major system crash. It got a green update for a spell in preview builds of Windows 10 back in late 2016.

This build is reportedly the final version of Windows’ next major update. It’s notable because it will add a handful of long-awaited features such as dictation, HDR support, and a cross-device syncing capability called Timeline. It also includes new Fluent interface design changes. Microsoft first revealed this design schema at its Build Conference last year.

Codenamed “Redstone 4,” this latest update doesn’t have an official name yet. The “Spring Creators Update” has been tossed around, as has the “Windows 10 April 2018 Update.”

The current build version (which addresses the BSOD issues) is available to Windows 10 Insiders that belong to the Fast Ring. Slow Ring and Release Preview availability will come next, but the update may not officially launch until May.

This year’s Microsoft Build Conference, which should shed light on additional Windows 10 updates and features, will take place beginning May 7 in Seattle.