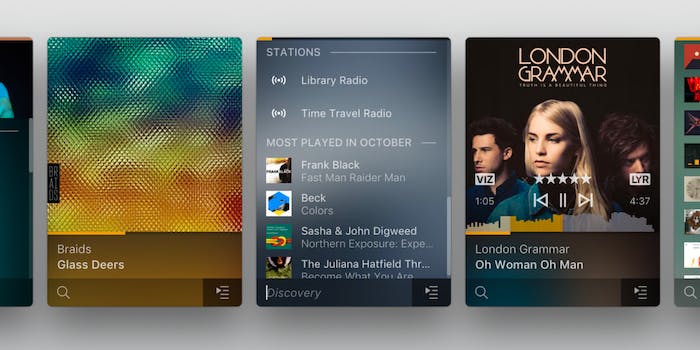 Winamp was the greatest music player that ever existed—at least in the hearts of internet users of a certain age. While it was never officially “killed” (like AIM was last week), updates to the MP3 player went by the wayside over the past 20 years and a series of acquisitions. Thanks to media suite Plex, Winamp is being resuscitated, in some form, as a new media player Plexamp.

According to Plex Labs’ blog post about the app, Plexamp serves a handful of functions: It’s “an homage to the past, a testbed for experimentation and play, and frankly, a way to learn fancy new JavaScript features” (for the Plex Labs developers, that is).

In fulfilling that first requirement, Plexamp is a small app that sits unobtrusively on your desktop, much like Winamp used to. It works on macOS and Windows like a native app, so you can use keyboard keys for navigation shortcuts (pausing, playing, and skipping tracks) and deliver notifications, too. It plays just about any music format and works offline as well as online.

In addition to making its tiny music playing window richer and more information-filled than the original Winamp screen, Flex Labs also made some other nuanced updates to the experience.

Between tracks, Plexamp offers gapless playback—no pauses between tracks when you’re playing an album start to finish. It also does a subtle fade out and fade in when you pause and play a track, rather than just cutting off the music abruptly. And, perhaps most importantly, like the Winamp media player, Plexamp includes visualizations that can play while you listen.

The app experiments on some technologies the company is working on. This includes loudness leveling, which normalizes playback volume when you’re skipping between different albums or artists; smart, seamless transitions between tracks; and what it calls SoundPrints, visualizations that use a track’s loudness profile and color cues from its album art. Honestly, a compilation of these (a few examples below) would make a terrific poster.

Other features include waveform seeking, so you can easily jump to a specific place in a track, and three different stations for listening to your favorite artists or favorite songs. The first, called library radio, pulls tracks based on your listening history and their popularity rating. The second, time-travel radio, plays songs from your library but in order of track release date, so you end up traveling forward through time with the music selections. And the third is a Spotify or Pandora-style artist radio, that pulls in music that sounds similar to a particular artist’s style.

You can download Plexamp for Windows and macOS here.